If the player is able to identify strongly defined path lines or unrealistic move behavior, it will generate frustration. In the worst case the player will figure out how to anticipate the character's movements, which results in a boring game experience.

The wander steering behavior aims to produce a realistic "casual" movement, which will make the player think that the character is really alive and walking around.

There are several ways to implement the wander pattern using steering behaviors. The simplest is using the previously described seek behavior. When a character is performing seek, it will move towards a target.

If the position of that target changes every few seconds, then the character will never be able to reach the target (and even if it does,  the target will move again). Placing the target randomly in the game area will make the character eventually move around the whole environment chasing the target. The demo below shows this approach in action:


The seek behavior and a random target. Click the demo to show force vectors.

The code for this implementation would be:

Even though this is a simple and good approach, the final result is not so convincing. Sometimes the character completely inverts its route because the target is placed behind it. The character's behavior seems much more like "Damn, I forgot my keys!" than "Okay, I will follow this direction now".

Another implementation of the wander behavior was proposed by Craig W. Reynolds when he invented those behaviors. The basic idea is to produce small random displacements and apply to the character's current direction vector (the velocity, in our case) every game frame. Since the velocity vector defines where the character is heading to and how much it moves every frame, any interference with that vector will change the current route.

That approach can also be implemented in different ways. One of them is to use a circle in front of the character, using that to calculate all forces involved: 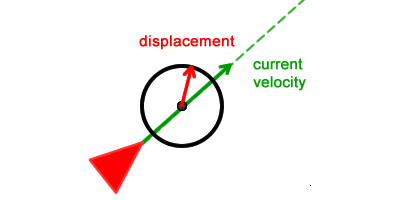 The displacement force  has its origin at the circle's center, and is constrained by the circle radius. The greater the radius and the distance from character to the circle, the stronger the "push" the character will receive every game frame.

This displacement force will be used to interfere with the character's route. It is used to calculate the wander force.

The first component required to calculate the wander force is the circle's center position. Since the circle should be placed in front of the character, the velocity vector can be used as a guide:

The circleCenter vector above is a clone (copy) of the velocity vector, which means they point to the same direction. It is normalized and multiplied by a scalar value (CIRCLE_DISTANCE, in this case) which will result in the following vector:

The next component is the displacement force, which is responsible for the right or left turn. Since this is a force used to produce disturbance, it can point anywhere. Let's use a vector aligned with the Y axis:

The displacement force is created and scaled by the circle radius. As previously described, the greater the radius, the stronger the wander force. The wanderAngle is a scalar value that defines how much the displacement force should be "tilted"; after it is used a random value is added to make it different for the next game frame. It produces the required randomness in the movement.

For the sake of understanding, let's assume the displacement force calculated above is placed at the circle's center. Since it was scaled by the circle radius value, it would be something like this: 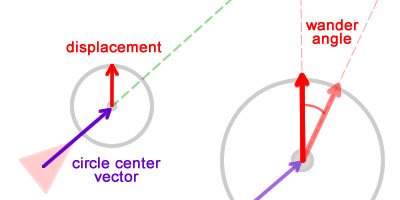 Tip: Remember that math vectors do not have a position in the space, they have a direction and a magnitude (length). As a consequence they can be placed anywhere.

After the circle center and the displacement vector are calculated, they must be combined to produce the wander force. That force is calculated by adding those two vectors: 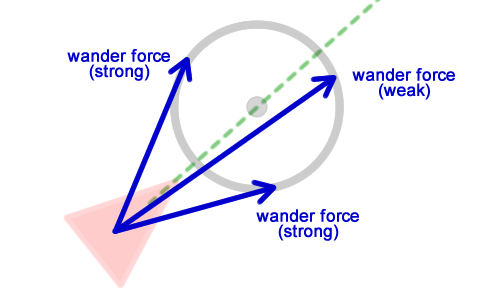 After the wander force has been calculated, it must be added to the character's velocity so it can affect its movement. The addition of that force is performed in the same way as before:

The wander force will affect the character's route in the same way that the previously described behaviors did, with the difference that it pushes the character to a random direction each game frame:


The wander behavior. Click the demo to show force vectors.

The demo above shows several characters wandering in the environment. If they leave the screen they are respawned at the center.

The wander behavior is an excellent way of implementing random movements. It is controlled by an imaginary circle placed in front of the character, which can be tweaked to produce the desired movement pattern.

This tutorial described steering behaviors, explaining the wander behavior. In the next post, we will learn about more behaviors. Keep up to date by following us on Twitter, Facebook, or Google+.