Steering behaviors aim to help autonomous characters move in a realistic manner, by using simple forces that are combined to produce life-like, improvisational navigation around the characters' environment. In this tutorial I will cover the basic theory behind the seek steering behavior, as well as its implementation.

The ideas behind these behaviors were proposed by Craig W. Reynolds; they are not based on complex strategies involving path planning or global calculations, but instead use local information, such as neighbors' forces. This makes them simple to understand and implement, but still able to produce very complex movement patterns.

The implementation of all forces involved in steering behaviors can be achieved using math vectors. Since those forces will influence the character's velocity and position, it's a good approach to use vectors to represent them as well.

Even though a vector has a direction, it will be ignored when related to position (let's assume the position vector is pointing to the character's current location).

The figure above represents a character positioned at (x, y) with a velocity (a, b). The movement is calculated using  Euler integration:

The direction of the velocity vector will control where the character is heading to while its length (or magnitude) will control how much it will move every frame. The greater the length, the faster the character moves. The velocity vector can be truncated to ensure it will not be greater than a certain value, usually max velocity. Below is a test showing that approach.

The red square is moving towards a target (the mouse cursor). This movement pattern illustrates the seek behavior without any steering forces being applied so far. The green line represents the velocity vector, calculated as follows:

It's important to notice that without the steering force, the character describes straight routes and it instantly changes its direction when the target moves, thus making an abrupt transition between the current route and the new one.

If there was only the velocity force involved, the character would follow a straight line defined by the direction of that vector. One of the ideas of steering behaviors is to influence the character's movement by adding forces (called steering forces). Depending on those forces, the character will move in one or another direction.

For the seek behavior, the addition of steering forces to the character every frame makes it smoothly adjust its velocity, avoiding sudden route changes. If the target moves, the character will gradually change its velocity vector, trying to reach the target at its new location.

Those forces are calculated as follows: 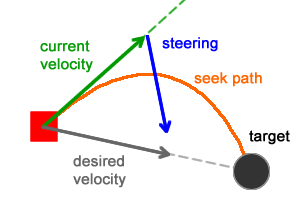 The addition of those forces and the final velocity/position calculation are:

Every time the target moves, each character's desired velocity vector changes accordingly. The velocity vector, however, takes some time to change and start pointing at the target again. The result is a smooth movement transition.

Steering behaviors are great for creating realistic movement patterns. The main idea is to use local information to calculate and apply forces to create the behaviors. Even though the calculation is simple to implement, it is still able to produce very complex results.

This tutorial described the basics of steering behaviors, explaining the seek behavior. Over the next few posts, we will learn about more behaviors. Check out the next post: Flee and Arrival.

Steering BehaviorsPlatform AgnosticFlashProgrammingAS3Artificial IntelligenceSimulationMathematics
Did you find this post useful?
Yes No
Would you like to provide feedback (optional)?
Cancel Submit
Want a weekly email summary?
Subscribe below and we’ll send you a weekly email summary of all new Game Development tutorials. Never miss out on learning about the next big thing.
Sign up

Fernando Bevilacqua
Fernando is a Computer Science professor who plays as an indie game developer during his free time. He runs the Flash gamedev site As3GameGears.
as3gamegears
Download Attachment
Looking for something to help kick start your next project?
Envato Market has a range of items for sale to help get you started.