So far we have looked at the seek, flee, arrival and wander steering behaviors. In this tutorial, I'll cover the pursuit and the evade behaviors, which make your characters follow or avoid the target.

What Is a Pursuit?

A pursuit is the process of following a target aiming to catch it. It's important to note that the word "catch" makes all the difference here. If something is just following a target, all it has to do is repeat the target's movements and, as a consequence, it will be on its track.

As described in the first tutorials the movement is calculated using Euler integration:

As a direct consequence, if the current character's position and velocity are known it is possible to predict where it will be within the next T game updates. Assuming the character is moving in a straight line and the position we want to predict is three updates ahead (T=3), the character's future position will be:

If the prediction is calculated for every game frame, it works even if the target is constantly changing its direction. Every update a new "future position" is generated based on the character's current velocity vector (which also guides the movement direction).

The pursuit behavior works pretty much the same way seek does, the only difference is that the pursuer will not seek the target itself, but its position in the near future.

Assuming every character in the game is represented by a class named Boid, the following pseudo-code implements the basic idea behind the pursuit behavior:

After the pursuit force calculation, it must be added to the velocity vector just like all previous steering forces:

The figure below illustrates the process: 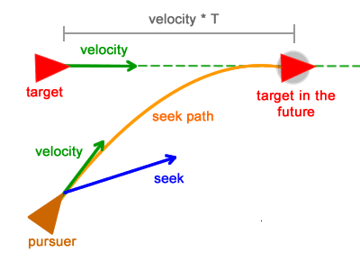 The pursuer (the character at the bottom) will seek the target's future position, following a trajectory described by the orange curve. The final result will be:

That behavior would never happen in a real pursuit because the pursuer would know it is close enough to the target and should stop predicting its position.

There is a simple trick that can be implemented to avoid that and drastically improve the pursuit accuracy. The idea is very simple; instead of a constant value for T, a dynamic one is used:

The new T is calculated based on the distance between the two characters and the maximum velocity the target can achieve. In simple words the new T means "how many updates the target needs to move from its current position to the pursuer position".

The final result is:

The pursuit behavior using a dynamic T. Click the demo to show force vectors. The target seeks the mouse. 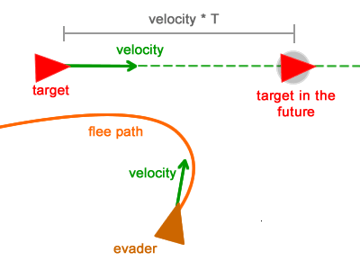 The code for evading is almost identical, just the last line is changed:

The final result is the following:


The evade behavior. Click the demo to show force vectors. The target seeks the mouse.

This tutorial described the pursuit and the evade behaviors, which are great to simulate a variety of patterns, such as a group of animals trying to escape from a hunter.

I hope you've enjoyed these tips so far and can start using all those behaviors, combining them to create even better patterns! Keep up to date by following us on Twitter, Facebook, or Google+.