Hi! I'm Jamie Fristrom of Happion Laboratories. You may remember me from such games as Die By The Sword, Spider-Man 2, and Schizoid... all of which, in one form or another, included rope. I've lately been working on a game called Energy Hook - recently launched on Kickstarter - which is all about rope. (Well, it's all about your graviton-powered grapple beam, anyway.)

I'm going to discuss how I like to implement a rope-swinging gameplay mechanic. When I started working on Energy Hook I mostly did everything with my own custom code. I believe it's possible to simply go into Unity and use the Configurable Joint to do some very similar stuff, but at the time it wasn't available. I'm pretty sure this has been the right call, anyway, because it gives me control over everything - and I can share it with you.

The fundamentals of doing swinging the way I did - using constraints - are actually quite simple. (Hope you're not disappointed when you see what's under the hood.) It works the same whether you're making a 2D game or 3D game, it's just that the vectors are different, so I'll start off with 2D and then discuss some wrinkles when going to three dimensions.

This article also assumes you're using a game engine like Unity that can do a lot of the work for you, like raycasting against geometry and orienting a character, with simple function calls. If you're using your own engine, you may have to do that math yourself.

There are two ways game simulations often work. Most third person games have canned everything; canned animations and canned movements so everything looks perfect, the character's feet don't slide, straight from the animator's animation program to us. The alternative is a much more physical simulation - you're simulating physics: acceleration, velocity, gravity - a lot of first-person games do this, but third-person games tend to avoid it, because it's much easier to have the character's feet slide and the physical stuff not match the animation.

If you want to do a non-canned rope swing (as opposed to a canned rope swing, as seen in the very first Pitfall, or the early Spider-Man games like Neversoft's on the PSX), a rope-swing that's actually a physical simulation and can therefore maybe have freedom and nuance and the visceral feeling that real gravity and momentum can give you, then you're going to want to do it the second way - have everything be a physical simulation, and avoid doing canned things that kill the character's momentum. Then, everything will flow.

That's the way I do things with Energy Hook.

There are a ton of articles out there on how to simulate physics - here's one with a cool Flash demo built in. You can do Euler integration or Verlet integration, it doesn't really matter. (I won't teach you about Euler vs. Verlet here, but let me just say that the concepts aren't as scary as they sound.)

Let's assume we do the bone simple Euler integration. Our character's game timestep might look like this, where acceleration is determined by gravity and how you're pushing on the stick:

Your game probably has some system for colliding with world geometry. It probably looks something like this:

What happens to your avatar's velocity when they hit an obstacle? It doesn't make sense for your avatar to keep maintaining the same velocity through the wall. Some games might bounce you, using the normal of where you intersected to reflect your velocity; other games might let you slide along the wall; others will be somewhere in between. Let's look at code for sliding along a wall:

(If you're doing Verlet integration, where each frame you're already determining velocity simply by looking at previous position data, this step is already done for you.)

Also, videogames being the hacky things they are, you'll probably often find that your character's position snaps suddenly from one frame to the next in certain corner cases. When this happens, their velocity will go through the roof. My solution for that is simply a hack: check if their velocity gets too extreme and fix it if it does.

What does that code do when you hit a wall at an angle? The first frame, it changes your velocity dramatically as you hit the wall, but it's still pushing you through the wall. The next frame, your avatar gets updated into the wall again, and then pushed back out again, but now the velocity is the avatar's new position, slid along the wall, minus his old position, against the wall, so it's parallel to the wall.

This is a huge oversimplification of what goes on in the real world when one object collides with another, but most of your players won't notice or care.

At this point, though, we've successfully constrained our avatar's position and velocity with the walls and floors of our game. So now we're ready.

Constraining With Tethers Instead of Walls

So now imagine that your avatar is already attached by a virtual rope to a virtual point. As far as we're concerned, we can simply consider that an invisible circular or spherical wall. We can test collision by seeing if you've gotten too far away from the center of the circle, and pull the avatar back in.

Some Subtlety and Nuance

At this point, you have a swinging game. But there are probably going to be a few things about it that get in the way of fun for your players, and this is where a little hacking can make things better.

Depending on your game, and whether it is supposed to be simulating a length of rope or an elastic web or a grapple beam, you may have different approaches to slack and springiness. You can simulate a lot of stuff by tweaking the tetherLength. If you want to take slack out of your springy web or grapple beam, you can shorten the tetherLength as the player gets closer to the tether point:

But if it's a nonelastic rope, you'd leave the tetherLength untouched.

For springiness, you can have a desiredLength that's fixed and a currentLength that continually tries to approach the desiredLength - this will also be useful for our next step:

But I Don't Want to Hit the Ground!

What if your avatar starts out in a low place and tries to swing? It's pretty obvious they won't get very far. A quick fix for that is to check how high above the ground the point they want to swing from is, and shorten the length of their tether so they'll clear the ground.

You can't just shorten it over one frame though, because then they'll suddenly snap into the air - so here, having a desiredLength that's short enough to not touch the ground and a currentLength that rapidly approaches desiredLength will get you the clearance you want.

If your avatar is a humanish figure, it doesn't make much sense for them to appear constantly perfectly vertical as they're swinging. Orienting them so they look like they're hanging from the rope - so they're upside down if they're doing a loop, for example - might look like this in Unity:

This will let the avatar swing backwards. You could also use the avatar's velocity for their forward (that's what I do) - or let them spin crazily...

In the real world, ropes wrap around stuff. A quick way to simulate that in your code is to raycast along the virtual rope each frame, and if it hits something, make a new attachment point where it intersects. This won't look right if the avatar then swings back on a nonsticky rope, but is fine for a sticky web, tongue or grapple beam.

The hardest thing about bringing this 2D mechanic to 3D is considering the interface for the player - how they pick points in the world to swing from. Different games use different methods for picking such a point. Ratchet & Clank has fixed points in the world you can grapple; with the Quake grappling-hook mod and Bionic Commando: Rearmed you point the camera at what you want to attach to; Spider-Man 2 and Energy Hook cast rays out relative to the character, and where the rays intersect physical geometry that's the point where you attach.

Almost all of these methods involve raycasting against the world's physical geometry, whether it's along the line of the camera or from the character to the point of the mouse click - the intersection of the raycast determines your new tetherpoint.

For example, here's a mouse-look raycast that might be good for a first-person game:

Bumping into walls and the like also tends to happen a lot more often in a 3D game than a 2D game, especially when it's the walls that you're tethering yourself to. There are a variety of things you can do to make this less annoying.

So What Are You Waiting For?

I hope you've found this article useful. If you have, please support the Energy Hook Kickstarter or vote it up on Steam Greenlight. Thanks! 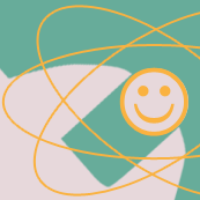 Jamie Fristrom
Aka Happion Labs. Currently working on Energy Hook. Check out my blog or follow me on Twitter!
Weekly email summary