Make Your Game Pop With Particle Effects and Quadtrees

So you want explosions, fire, bullets, or magic spells in your game? Particle systems make great simple graphical effects to spice up your game a little. You can wow the player even more by making particles interact with your world, bouncing off of the environment and other players. In this tutorial we'll implement some simple particle effects, and from here we'll move on to making the particles bounce off of the world around them.

We'll also optimise things by implementing a data structure called a quadtree. Quadtrees allow you to check for collisions much more quickly than you could without one, and they are simple to implement and understand.

Note: Although this tutorial is written using HTML5 and JavaScript, you should be able to use the same techniques and concepts in almost any game development environment.

In order to see the in-article demos, be sure to read this article in Chrome, Firefox, IE 9, or any other browser that supports HTML5 and Canvas.

Notice how the particles change color as they fall, and how they bounce off the shapes.

What Is a Particle System?

A particle system is a simple way of generating effects like fire, smoke, and explosions.

You create a particle emitter, and this launches small "particles" which you can display as pixels, boxes, or small bitmaps. They follow simple Newtonian physics and change color as they move, resulting in dynamic, customizable, graphical effects.

The Start of a Particle System

Our particle system will have a few tunable parameters:

If every particle spawned exactly the same, we'd just have a stream of particles, not a particle effect. So let's also allow configurable variability. This gives us a few more parameters for our system:

We end up with a particle system class which starts like this:

Every frame we need to do three things: create new particles, move existing particles, and draw the particles.

Creating particles is pretty simple. If we are creating 300 particles per second, and it's been 0.05 seconds since the last frame, we create 15 particles for the frame (which averages to 300 per second).

We should have a simple loop that looks like this:

Our spawnParticle() function creates a new particle based upon our system's parameters:

We choose our initial velocity from a random angle and speed. We then use the fromPolar() method to create a Cartesian velocity vector from the angle/speed combination.

If you need to brush up on trigonometry a little, all of the trigonometry we are using is derived from the Unit Circle.

Particle movement follows basic Newtonian laws. Particles all have a velocity and position. Our velocity is acted on by the force of gravity, and our position changes proportionally to gravity. Finally we need to keep track of each particle's life, otherwise particles would never die, we'd end up having too many, and the system would grind to a halt. All of these actions occur proportionally to the time between frames.

Finally we have to draw our particles. How you implement this in your game will vary greatly on a platform to platform basis, and how advanced you want the rendering to be. This can be as simple as placing a single colored pixel, to moving a pair of triangles for each particle, drawn by a complex GPU shader.

In our case, we'll take advantage of the Canvas API to draw a small rectangle for the particle.

Color interpolation depends on whether the platform you are using supplies a color class (or representation format), whether it provides an interpolator for you, and how you want to approach the entire issue. I wrote a small gradient class which allows easy interpolation between multiple colors, and a small color class which provides the functionality to interpolate between any two colors.


Here's our particle system in action!

As you can see in the demo above, now we have some basic particle effects. They lack any interaction with the environment around them, though. To make these effects part of our game world, we're going to have them bounce off of the walls around them.

To start off, the particle system will now take a collider as a parameter. It will be the collider's job to tell a particle whether it has crashed into anything. The step() method of a particle now looks like this:

Now every time the particle moves, we ask the collider whether its path of movement has "collided" via the getIntersection() method. If so, we reset its position (so that it is not inside whatever it intersected), and reflect the velocity.

Notice a problem? Every particle needs to call collider.getIntersection() and then every getIntersection call needs to check against every "wall" in the world. If you have 300 particles (kind of a low number), and 200 walls in your world (not unreasonable either), you are performing 60,000 line intersection tests! This could grind your game to a halt, especially with more particles (or more complex worlds).

The problem with our simple collider is that it checks every wall for every particle. If our particle is in the upper-right hand quadrant of the screen, we shouldn't need to waste time checking whether it crashed into walls that are only in the bottom or left of the screen. So ideally we want to cut out any checks for intersections outside of the top-right quadrant: 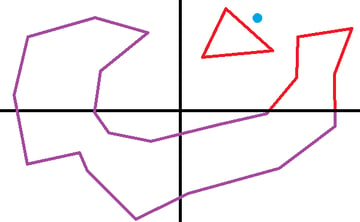 We just check for collisions between the blue dot and the red lines. 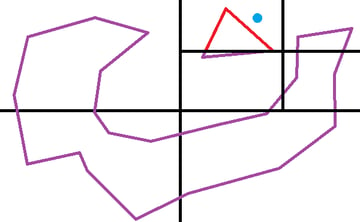 Quadtrees allow you to do exactly this! Rather than test against all walls, you split walls into the quadrants and sub-quadrants they occupy, so you only need to check a few quadrants. You can easily go from 200 checks per particle to just 5 or 6.

The steps to create a quadtree are as follows:

Building a quadtree. The numbers represent the number of lines within the quadrant, red being too high and needing to subdivide.

To build our quadtree we take a set of "walls" (line segments) as a parameter, and if too many are contained within our rectangle, we subdivide into smaller rectangles, and the process repeats.

You can see the full QuadTree class here:

Testing for intersection against a line segment is performed in a similar manner. For every rectangle we do the following:

Searching a Quadtree. We start at the largest rectangle and search smaller and smaller ones, until finally testing individual line segments. With the quadtree, we only perform four rectangle tests and two line tests, instead of testing against all 21 line segments. The difference only grows more dramatic with larger data-sets.

Once we pass a QuadTree object to our particle system as the "collider" we get lightning-fast look-ups. Check out the interactive demo below - use your mouse to see which line segments the quadtree would need to test against!


Hover over a (sub-)quadrant to see which line segments it contains.

The particle system and quadtree presented in this article are rudimentary teaching systems. Some other ideas you may want to consider when implementing these yourself:


ProgrammingPlatform AgnosticHTML5
Did you find this post useful?
Yes No
Would you like to provide feedback (optional)?
Cancel Submit
Want a weekly email summary?
Subscribe below and we’ll send you a weekly email summary of all new Game Development tutorials. Never miss out on learning about the next big thing.
Sign up

Daniel Church
I work as a software engineer for a consulting firm, which creates and maintains excellent mobile, web, and desktop applications. In my free time I often pretend to be a video game developer.
Download Attachment
Looking for something to help kick start your next project?
Envato Market has a range of items for sale to help get you started.