Sploosh! In this tutorial, I'll show you how you can use simple math, physics, and particle effects to simulate great looking 2D water waves and droplets.

Note: Although this tutorial is written using C# and XNA, you should be able to use the same techniques and concepts in almost any game development environment.

If you have XNA, you can download the source files and compile the demo yourself. Otherwise, check out the demo video below:

To make the waves, we'll model the surface of the water as a series of vertical springs, as shown in this diagram: 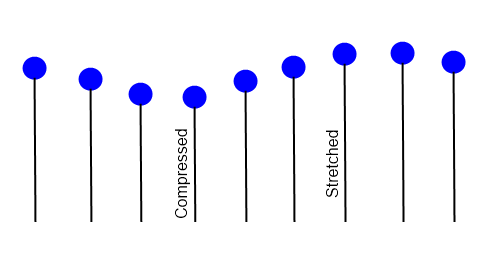 One great thing about springs is that they're easy to simulate. Springs have a certain natural length; if you stretch or compress a spring, it will try to return to that natural length.

The force provided by a spring is given by Hooke's Law:

The spring constant, k, determines the stiffness of the spring.

To simulate springs, we must figure out how to move particles around based on Hooke's Law. To do this, we need a couple more formulas from physics. First, Newton's Second Law of Motion:

Here, F is force, m is mass and a is acceleration. This means the stronger a force pushes on an object, and the lighter the object is, the more it accelerates.

Combining these two formulas and rearranging gives us:

This gives us the acceleration for our particles. We'll assume that all our particles will have the same mass, so we can combine k/m into a single constant.

This is called the Euler method. It's not the most accurate type of numerical integration, but it's fast, simple and adequate for our purposes.

Putting it all together, our water surface particles will do the following each frame:

Here, TargetHeight is the natural position of the top of the spring when it's neither stretched nor compressed. You should set this value to where you want the surface of the water to be. For the demo, I set it to halfway down the screen, at 240 pixels.

A word of warning: do not set the spring constant too high. Very stiff springs apply very strong forces that change greatly in a very small amount of time. This does not play well with numerical integration, which simulates the springs as a series of discrete jumps at regular time intervals. A very stiff spring can even have an oscillation period that's shorter than your time step. Even worse, the Euler method of integration tends to gain energy as the simulation becomes less accurate, causing stiff springs to explode.

There is a problem with our spring model so far. Once a spring starts oscillating, it will never stop. To solve this we must apply some dampening. The idea is to apply a force in the opposite direction that our spring is moving in order to slow it down. This requires a small adjustment to our spring formula:

Now that we can make a spring, let's use them to model water. As shown in the first diagram, we're modelling the water using a series of parallel, vertical springs. Of course, if the springs are all independent, the waves will never spread out like real waves do.

I'll show the code first, and then go over it:

This code would be called every frame from your Update() method. Here, springs is an array of springs, laid out from left to right. leftDeltas is an array of floats that stores the difference in height between each spring and its left neighbour. rightDeltas is the equivalent for the right neighbours. We store all these height differences in arrays because the last two if statements modify the heights of the springs. We have to measure the height differences before any of the heights are modified.

The code starts by running Hooke's Law on each spring as described earlier. It then looks at the height difference between each spring and its neighbours, and each spring pulls its neighbouring springs towards itself by altering the neighbours' positions and velocities. The neighbour-pulling step is repeated eight times to allow the waves to propagate faster.

It's not necessary to have a spring for each pixel of width. In the demo I used 201 springs spread across an 800 pixel wide window. That gives exactly 4 pixels between each spring, with the first spring at 0 and the last at 800 pixels. You could probably use even fewer springs and still have the water look smooth.

What we want to do is draw thin, tall trapezoids that extend from the bottom of the screen to the surface of the water and connect the springs, as shown in this diagram:

Since graphics cards don't draw trapezoids directly, we have to draw each trapezoid as two triangles. To make it look a bit nicer, we'll also make the water darker as it gets deeper by colouring the bottom vertices dark blue. The GPU will automatically interpolate colours between the vertices.

The waves look pretty good, but I'd like to see a splash when the rock hits the water. Particle effects are perfect for this.

A particle effect uses a large number of small particles to produce some visual effect. They're sometimes used for things like smoke or sparks. We're going to use particles for the water droplets in the splashes.

The first thing we need is our particle class:

This class just holds the properties a particle can have. Next, we create a list of particles.

Each frame, we must update and draw the particles.

We update the particles to fall under gravity and set the particle's orientation to match the direction it's going in. We then get rid of any particles that are off-screen or under water by copying all the particles we want to keep into a new list and assigning it to particles. Next we draw the particles.

Below is the texture I used for the particles.

Now, whenever we create a splash, we make a bunch of particles.

You can call this method from the Splash() method we use to make waves. The parameter speed is how fast the rock hits the water. We'll make bigger splashes if the rock is moving faster.

GetRandomVector2(40) returns a vector with a random direction and a random length between 0 and 40. We want to add a little randomness to the positions so the particles don't all appear at a single point. FromPolar() returns a Vector2 with a given direction and length.

Our splashes look pretty decent, and some great games, like World of Goo, have particle effect splashes that look much like ours. However, I'm going to show you a technique to make the splashes look more liquid-like. The technique is using metaballs, organic-looking blobs which I've written a tutorial about before. If you're interested in the details about metaballs and how they work, read that tutorial. If you just want to know how to apply them to our splashes, keep reading.

Metaballs look liquid-like in the way they fuse together, making them a good match for our liquid splashes. To make the metaballs, we will need to add new class variables:

Then we draw the metaballs:

The metaball effect depends on having a particle texture that fades out as you get further from the center. Here's what I used, set on a black background to make it visible:

The water droplets now fuse together when they are close. However, they don't fuse with the surface of the water. We can fix this by adding a gradient to the water's surface that makes it gradually fade out, and rendering it to our metaball render target.

Add the following code to the above method before the line GraphicsDevice.SetRendertarget(null):

Now the particles will fuse with the water's surface.

The water particles look a bit flat, and it would be nice to give them some shading. Ideally, you would do this in a shader. However, for the sake of keeping this tutorial simple, we're going to use a quick and easy trick: we're simply going to draw the particles three times with different tinting and offsets, as illustrated in the diagram below.

To do this, we want to capture the metaball particles in a new render target. We'll then draw that render target once for each tint.

First, declare a new RenderTarget2D just like we did for the metaballs:

Then, instead of drawing metaballsTarget directly to the backbuffer, we want to draw it onto particlesTarget. To do this, go to the method where we draw the metaballs and simply change these lines:

Then use the following code to draw the particles three times with different tints and offsets:

That's it for basic 2D water. For the demo, I added a rock you can drop into the water. I draw the water with some transparency on top of the rock to make it look like it's underwater, and make it slow down when it's underwater due to water resistance.