In this series of tutorials, I'll show you how to make a Geometry Wars-inspired twin-stick shooter, with neon graphics, crazy particle effects, and awesome music, for iOS using C++ and OpenGL ES 2.0.

Rather than rely on an existing game framework or sprite library, we'll attempt to program as close to the hardware (or "bare metal") as we possibly can. Since devices running iOS run on smaller scale hardware compared to a desktop PC or games console, this will allow us to get as much bang for our buck as possible.

Related Posts
These tutorials are based on Michael Hoffman's original XNA series, which has been translated to other platforms:

The goal of these tutorials is to go over the necessary elements that will allow you to create your own high-quality mobile game for iOS, either from scratch or based on an existing desktop game. I encourage you to download and play with the code, or even to use it as a basis for your own projects.

We'll cover the following topics during this series:

Here's what we'll have by the end of the series:

And here's what we'll have by the end of this first part:

The music and sound effects you can hear in these videos were created by RetroModular, and you can read about how he did so over at our audio section.

The sprites are by Jacob Zinman-Jeanes, our resident Tuts+ designer.

The font we'll use is a bitmap font (in other words, not an actual "font", but an image file), which is something I've created for this tutorial.

All the artwork can be found in the source files.

Before we dive into the specifics of the game, let's talk about the Utility Library and Application Bootstrap code I've provided to support developing our game.

Though we'll primarily be using C++ and OpenGL to code our game, we'll need some additional utility classes. These are all classes I've written to help development in other projects, so they're time tested and usable for new projects such as this one.

We'll leverage some existing tried and true programming patterns used in C++ and other languages.

Since we're not using an existing game framework, we'll need some classes to deal with the mathematics behind the scenes.

Although OpenGL is a powerful API, it's C-based, and managing objects can be somewhat difficult to do in practice. So, we'll have a small handful of classes to manage the OpenGL objects for us.

These classes represent the closest we'll get to having a "game framework"; they provide some high level concepts that are not typical to OpenGL, but that are useful for game development purposes.

A minimal set of classes to round things out.

We'll also need what I call "Boostrap" code—that is, code that abstracts away how an application starts, or "boots up."

Overview of the Game

In this tutorial we will create a twin-stick shooter; the player will control the ship using on-screen multi-touch controls.

We'll use a number of classes to accomplish this:

The code in this tutorial aims to be simple and easy to understand. It will not have every feature designed to support every possible need; rather, it will do only what it needs to do. Keeping it simple will make it easier for you to understand the concepts, and then modify and expand them into your own unique game.

Entities and the Player's Ship

We'll start by creating a base class for our game entities. Take a look at the

All our entities (enemies, bullets and the player's ship) have some basic properties, such as an image and a position. mIsExpired will be used to indicate that the entity has been destroyed and should be removed from any lists holding a reference to it.

Next we create an EntityManager to track our entities and to update and draw them:

Remember, if you modify a list while iterating over it, you will get a runtime exception. The above code takes care of this by queuing up any entities added during updating in a separate list, and adding them after it finishes updating the existing entities.

We will need to load some textures if we want to draw anything, so we'll make a static class to hold references to all our textures:

We load the art by calling Art::getInstance() in GameRoot::onInitView(). This causes the Art singleton to get constructed and to call the constructor, Art::Art().

Also, a number of classes will need to know the screen dimensions, so we have the following members in GameRoot:

And in the GameRoot constructor, we set the size:

The resolution 800x600px is what the original XNA-based Shape Blaster used. We could use any resolution we wish (like one closer to an iPhone or iPad's specific resolution), but we'll stick with the original resolution just to make sure our game matches the look and feel of the original.

We made PlayerShip a singleton, set its image, and placed it in the center of the screen.

Finally, let's add the player ship to the EntityManager. The code in GameRoot::onInitView looks like this:

We're drawing the sprites with additive blending, which is part of what will give them their "neon" look. We also don't want any bluring or blending, so we use GL_NEAREST for our filters. We don't need or care about depth testing or backface culling (it just adds unnecessary overhead anyway), so we turn it off.

If you run the game at this point, you should see your ship in the center of the screen. However, it doesn't respond to input. Let's add some input to the game next.

For movement, we'll use a multi-touch interface. Before we go full force with on-screen gamepads, we'll just get a basic touch interface up and running.

In the original Shape Blaster for Windows, player movement could be done with the WASD keys the keyboard. For aiming, they could use the arrow keys or the mouse. This is meant to emulate Geometry Wars's twin-stick controls: one analog stick for movement, one for aiming.

We'll make a static class to keep track of the various input devices and to take care of switching between the different types of aiming:

We call Input::update() at the beginning of GameRoot::onRedrawView() for the input class to work.

As stated previously, we'll use the keyboard state later on in the series to account for movement.

First, we need a class for bullets.

We want a brief cooldown period between bullets, so we'll have a constant for that:

This code creates two bullets that travel parallel to each other. It adds a small amount of randomness to the direction, which makes the shots spread out a little bit like a machine gun. We add two random numbers together because this makes their sum more likely to be centered (around zero) and less likely to send bullets far off. We use a two-dimensional matrix to rotate the initial position of the bullets in the direction they're travelling.

There's one more thing we should do now that we have the inital Input class: let's draw a custom mouse cursor to make it easier to see where the ship is aiming. In GameRoot.Draw, simply draw Art's mPointer at the "mouse's" position.

If you test the game now, you'll be able to touch anywhere on screen to aim the continuous stream of bullets, which is a good start.

In the next part, we will complete the initial gameplay by adding enemies and a score. 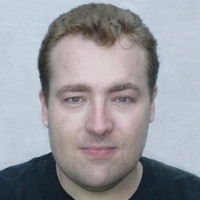