How to Create an Animated Waterfall

Are you ready to fight against another dangerous enemy of your game? An enemy? Yes—it's the performance!

As we discussed in my last article, poor performance will kill a great game.

On mobile and web platforms, especially, performance is a really big issue. But this is not only a current issue: in the past, PCs and consoles were less powerful than today. And by searching in the past, we can find great and smart solutions.

Today you'll learn how to put a great waterfall inside your game without degrading performance.

We'll use the below items:

Check the video below:

This is a great waterfall, isn't it? I love it. I would really like to put a waterfall like that in my game. But how?

We can start with a deconstruction technique. Look at the scene with attention: what parts is it made of?

We can do it with a couple of items, without killing the performance.

Why Can't We Use "Real Water" on Mobile?


In a 3D game, water is made with specific shaders and components (like particles) that cost a lot of time during the rendering phase. For this reason, high-level solutions are not recommended for a mobile game.

This tutorial is written in order to suggest a simple way of putting a waterfall inside a game without losing FPS.

You must adjust the tiling of the textures in the three materials conforming to the size of your planes.

Also, you must adjust the speed: the vertical plane should be faster than the others.

And... it's finished. Press play and see the result.


If you want to add some particles in order to add more effects to your waterfall, here are a couple of ideas.

Note: the textures are made with Paint or similar. They are very, very simple, so anybody can create textures like that.


Create a PS and named it "PS_spray". Move it in your scene until it is at the bottom of the waterfall.

Duplicate it and move it until it's at the top of the waterfall.


Create a PS and named it "PS_steam". Move it in your scene until it is at the bottom of the waterfall.


This is a simple trick to have a lava waterfall: change the color of the texture like this:

You may want to increase the max particles of the steam; and remember to remove the spray particles.


Sometimes the quick solution is also the best solution.

This tutorial, for example, was born in the past, during the '90s, when PCs were less powerful than today and developers had to find some creative solutions to work with their limitations.

The "trick" of an animated UV map is perfect for a lot of situations.

For example, you can use it to animate a background. Or, if the texture has more tiles (like a "frame from a cartoon"), you can create a short cinematic sequence. The only limit is your imagination.

Why is it very important to understand techniques like this nowadays? Because always, in game dev, you'll find bounds that you'll have to find a way around. And studying the past is, in my opinion, the best way to learn for the future. 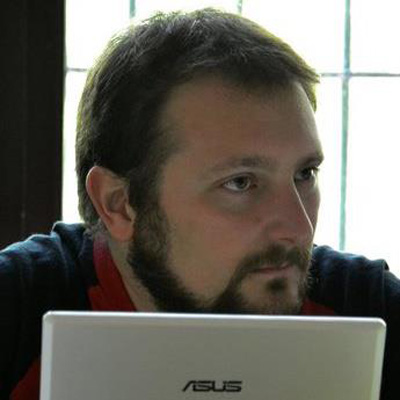 Matteo Sciutteri
Game Designer and Master Pizza Eater - Milan
I've worked as a Game Designer for 15 years, traveling around Italy. My career started at Artematica, and then I became Head of Design at Milestone, where I worked for seven years. After a short period at Dreamslair, I started my new adventure as a freelancer. Now I'm the co-founder of Runeheads, an indie dev company.
MasterRPG
Weekly email summary
Subscribe below and we’ll send you a weekly email summary of all new Game Development tutorials. Never miss out on learning about the next big thing.
Advertisement
Download Attachment
Translations