Most of the time, using conventional graphic techniques is the right way to go. Sometimes, though, experimentation and creativity at the fundamental levels of an effect can be beneficial to the style of the game, making it stand out more. In this tutorial I'm going to show you how to create an animated 2D lava river using Bézier curves, custom textured geometry and vertex shaders.

Click the Plus sign to open more options: you can adjust the thickness and speed of the river, and drag the control points and position points around.

The demo implementation above uses AS3 and Flash with Starling Framework for GPU accelerated rendering and the Feathers library for UI elements. In our initial scene we are going to place a ground image and a foreground rock image. Later we are going to add a river, inserting it between those two layers.

Rivers are formed by complex natural processes of interaction between a fluid mass and the ground beneath it. It would be impractical to do a physically correct simulation for a game. We just want go get the right visual representation, and to do so we are going to use a simplified model of a river.

Modeling the river as a curve is one of the solutions we can use, enabling us to have a good control and achieve a meandering look. I chose to use quadratic Bézier curves to keep things simple.

Bézier curves are parametric curves often used in computer graphics; in quadratic Bézier curves, the curve passes through two specified points, and its shape is determined by the third point, which is usually called a control point.

This type of curve is defined using the following mathematical formula:

Technically we are going to use multiple Bézier curves where the end of one is the start of the other, forming a chain.

Now we have to solve the problem of actually displaying our river. Curves have no thickness, so we are going to build a geometric primitive around it.

First we need a way to take curve and convert it into line segments. In order to do this we take our points and plug them in the mathematical definition of the curve. The neat thing about this is that we can easily add a parameter to control the quality of this operation.

Here's the code to generate the points from the definition of the curve:

And here's how to convert the curve to line segments:

We can now take an arbitrary curve and convert it into a custom number of line segments - the more segments, the higher the quality: 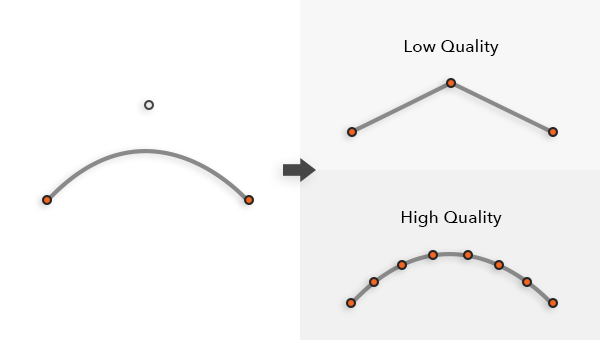 We'll now use the function defined earlier to create line segments form the curves. This will form a boundary around the original curve. 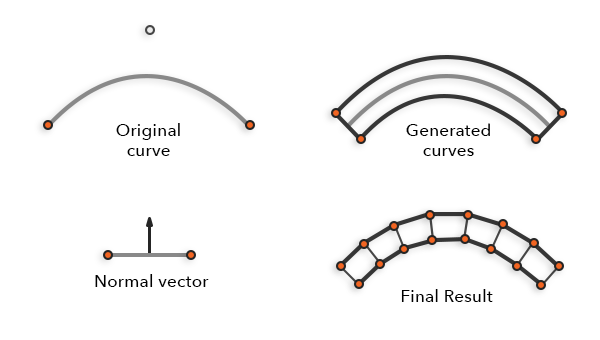 You can already see that we can use those points to define small four sided polygons - "quads". Our implementation uses a custom Starling DisplayObject, which gives our geometric data directly to the GPU.

One problem, depending on the implementation, is that we can't send quads directly; instead, we have to send triangles. But it's easy enough to pick out two triangles using four points:

Clean geometric style is fun, and it might even be a good style for some experimental games. But, to make our river look really good we could do with a few more details. Using a texture is a good idea. Which leads us to the problem of displaying it on custom geometry created earlier.

We'll have to add additional information to our vertices; positions alone won't do anymore. Each vertex can store additional parameters to our liking, and to support texture mapping we will need to define texture coordinates.

Texture coordinates are in texture space, and map pixel values of the image to the world positions of vertices. For each pixel that appears on the screen, we calculate interpolated texture coordinates and use them to lookup pixel values for positions in the texture. Values 0 and 1 in texture space correspond to texture edges; if values leave that range we have a couple of options:

Those who know a little bit about texture mapping are certainly aware of possible complexities of the technique. I have good news for you! This way of representing rivers is easily mapped to a texture.

From the sides texture height is mapped in its entirety, while the length of the river is segmented into smaller chunks of the texture space, appropriately sized to texture width.

Now to implement it in the code:

Now it looks a lot more like a river:

Our river now looks a lot more like a real one, with one big exception: it's standing still!

Okay, so we need to animate it. The first thing that you may think of is to use sprite sheet animation. And that may well work, but in order to keep more flexibility and save a bit on texture memory, we'll do something more interesting.

Instead of changing the texture, we can change the way the texture maps to the geometry. We do this by changing texture coordinates for our vertices. This will only work for tileable textures with mapping set to repeat.

An easy way to implement this is to change the texture coordinates on the CPU and send the results to the GPU every frame. That's usually a good way to start an implementation this kind of technique, since debugging is much easier. However, we are going to dive straight into the best way we can accomplish this: animating texture coordinates using vertex shaders.

From experience I can tell that people are sometimes intimidated by shaders, probably because of their connection to the advanced graphical effects of blockbuster games. Truth be told the concept behind them is extremely simple, and if you can write a program, you can write a shader - that's all they are, small programs running on the GPU. We are going to use a vertex shader to animate our river, there are several other types of shaders, but we can do without them.

As the name implies, vertex shaders process vertices. They run for every vertex, and take as an input vertex attributes: position, texture coordinates and color.

Our goal is to offset the X value of river's texture coordinate to simulate flow. We keep a flow counter and increase it every frame by time delta. We can specify an additional parameter for speed of the animation. Offset value should be passed to the shader as an uniform (constant) value, a way to provide shader program with more information than just vertices. This value is usually a four-component vector; we are just going to use the X component to store the value, while setting Y, Z, and W to 0.

This implementation uses the AGAL shader language. It can be a bit hard to understand, as it is an assembly like language. You can learn more about it here.

We are pretty much done, except that our river still looks unnatural. The plain cut between background and the river is a real eyesore. To solve this you can use an additional layer of the river, slightly thicker, and a special texture, which would overlay the river banks and cover the ugly transition.

And since the demo represents river of molten lava, we can't possibly go without a little glow! Make another instance of river geometry, now using a glow texture and set its blending mode to "add". For even more fun, add smooth animation of the glow alpha value.

Of course, you can do a lot more than just rivers using this kind of effect. I've seen it used for ghost particle effects, waterfalls or even for animating chains. There is a lot of room for further improvement, performance wise final version from above can be done using one draw call if textures are merged to an atlas. Long rivers should be split into multiple parts and culled. A major extension would be to implement forking of curve nodes to enable multiple river paths and in turn simulate bifurcation.

I'm using this technique in our latest game, and I'm very pleased with what we can do with it. We are using it for rivers and roads (without animation, obviously). I'm thinking of using a similar effect for lakes.

I hope I gave you some ideas about how to think outside of regular graphic techniques, such as using sprite sheets or tile sets to accomplish effects like this. It requires a little bit more work, a little math, and some GPU programming knowledge, but in return you get much greater flexibility. 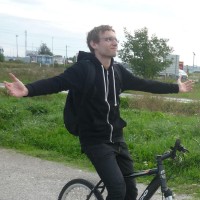 Tomislav Podhraski
I'm a game developer with a passion for programming and graphic techniques, while also dabbling in design from time to time. At the moment I'm working on a small team making games for mobile, desktop and web. You can find out exactly what at Just Pine Games.
Weekly email summary
Subscribe below and we’ll send you a weekly email summary of all new Game Development tutorials. Never miss out on learning about the next big thing.
Advertisement
Download Attachment
Translations