Particle effects are very common in games - it's hard to find a modern game that doesn't use them. In this tutorial we're going to take a look how to build a fairly complex particle engine and use it to create a fun snowy scene. Put your woolly hat on and let's begin.

Click and drag the mouse to interact with the snow effect.

No Flash? Check out this video of the demo on YouTube:

The demo implementation above uses AS3 and Flash, with the Starling Framework for GPU accelerated rendering. A pre-rendered image of 3D scene (available in the source download) will be used as a background. In the middle layers we'll place particle effects, and the whole scene will be multiplied by a texture representing light attribution.

In games we often have to simulate various visual and motion phenomena, and frequently need to display dynamic visual effects such as fire, smoke and rain. There are multiple ways we can do this; a common method is to use particle effects.

This involves using lots of small elements - usually images oriented to face the camera - but they could be done using 3D models as well. The main goal is to update the position, scale, color and other properties of a group of many particles (perhaps several thousand). This will create an illusion of how the effect looks in real life. 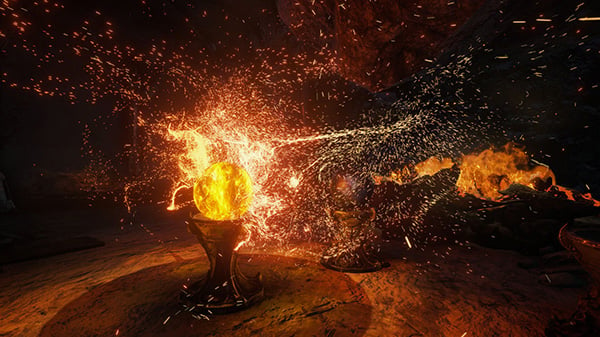 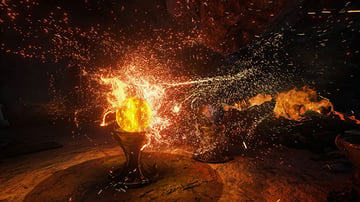 Typical particle effects consist of one or more particle emitters. An emitter is the place where particles originate from; it can take various shapes and have different behaviors. It adds the initial position and angle of particles, and can also define other starting parameters, such as initial velocity.

We'll create one type of emitter, a box emitter, which will spawn particles within - you've guessed it - a box that we define.

To make it easy for us to add more emitters, we'll use a programming construct called an interface which defines that the class implementing it has to have a defined set of methods. In our case, we'll require just one method:

Implementing this in the box emitter is super simple; we take a random point between the minimum and maximum points which define the box:

To make this example more interesting and a bit more advanced we'll add the concept of: a collider and force sources.

A collider will be an object consisting of one or more geometry definitions, which can be attached to a particle emitter. When a particle has an interaction with collider (that is, when it enters the geometry) we'll get an event to decide what we would like to do. This will be used to stop snow flakes from moving when they collide with the ground.

In the same manner as with the emitters we'll use an interface which requires us to implement the following function:

Note: this is a simple implementation, so we are taking just the position into account when checking for collision.

The implementation of the box collider is straightforward; we check whether the point is within the bounds of the box:

The other type of object we'll introduce is a force source. This will have an effect on a particle's velocity based on its parameters and the particle's position and mass.

The simplest source will be called the directional force source, and we'll define it with a single vector D (used for the force direction and strength). It doesn't take particles' positions into account; it just applies the force on all the particles from that effect. With this we'll be able to simulate gravity and wind - for wind the direction will vary in time in order to feel more realistic.

Another type of force source will depend on the distance between a defined point and particles, getting weaker further away from the center. This source will be defined by its position P and strength factor S. We'll use this to enable mouse interaction with the snow.

The force sources will have their own interface, requiring the following method to be implemented:

The direction force source implementation is the simpler of the two:

This is the point force source implementation:

Note that this method will be called continually. This enables us to change force parameters when the effect is active. We'll use this feature to simulate the wind and add mouse interactivity.

The main part of the implementation is in the Effect class, which is responsible for spawning and updating particles.

The amount of particles to spawn will be determined by the spawnPerSecond value in the update method:

Updating is a bit more complex. First the implementation updates the forces, then it calls the particle simulation update and checks for collisions. It is also responsible for removing particles when they are not needed any more.

I've not yet mentioned the most important part of the implementation: how we represent particles. The Particle class will inherit from an object we can display (image) and have some properties that will effect its change during the update:

Each particle has an update function which is called with time delta (dt). I would like to show the part of that function dealing with the updating of particle position, which is common in games:

This is done using Euler integration and it has accuracy errors, but since we are using it just for visual effects these won't bother us. If you are doing physics simulations important to the gameplay you should look into other methods.

Finally we have come to the point where I'll explain how to implement the actual effect. To make a new effect we'll extend the Effect class.

We'll start with the snow effect. First, place a box emitter on top of the screen, and use it to spawn quite a few particles. A collider will be used to detect whether a particle has reached the floor, in which case we'll set its movable property to false.

The important thing we have to ensure is that the particles are random enough so that they don't create visible patterns on the screen, which damages the illusion. We do this in a couple of ways:

We initialize each snow particle in this way:

To give them realistic motion of falling from the sky we'll use a directional force source as gravity. It would be too easy to stop here, so we are going to add another directional force to simulate wind, which will vary in time.

We'll vary the wind value using a sine function; this was mostly determined through experimentation. For the x-axis we raise sine to the power of 4, making its peak sharper. Every six seconds there will be a peak, producing the effect of a strong gust of wind. On the y-axis wind will quickly oscillate between -20 and 20.

Take a look at the function plot to get a better understanding of what is going on.

To complete the effect we're going to add a subtle fog effect, using a box emitter that covers the whole scene.

Since the texture we'll use for the particle is relatively big, the emitter will be set to spawn a small number of particles. The alpha level of the particle will from the beginning be low to prevent it from completely obscuring the scene. We'll also set them to rotate slowly, in order to simulate a wind effect.

To add a bit more atmosphere to the example, I've added a light texture which will be on the top scene layer; its blending will be set to Multiply. The particle effects will now be much more interesting, since their base white color will be changed to match the light, and the scene as a whole will feel more integrated.

A common way to optimize the simulation of a lot of particles is to use the concept of pooling. Pooling enables you to reuse objects which have already been created, but are no longer needed.

The concept is simple: when we are finished with a certain object, we put it in a "pool"; then, when we need another object of the same type, we first check to see if a "spare" on is in the pool. If it is, we just take it and apply new values to it. We can insert a certain number of these objects in the pool at the start of the simulation to prepare them for later.

Tip: You can find more detailed information about pooling in this article.

Another way we can optimize particle effects is by precomputing them to a texture. By doing this you'll lose a lot of flexibility, but the advantage is that drawing an effect would be the same as drawing a single image. You would animate the effect in the same manner as a regular sprite sheet animation. 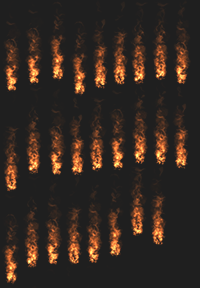 However, you need to be careful: this is not well suited for full-screen effects like snow, since they would take a lot of memory.

A cheaper way to simulate snow would be to use a texture with multiple flakes inside, and then do a similar simulation to the one we did, but using far less particles. This can be made to look good, but takes additional effort.

Here is an example of that (from the intro scene of Fahrenheit, aka Indigo Prophecy):

Before you start writing your own particle engine, you should check whether the technology you are using to make your game already features particle effects, or whether a third party library exists. Still, it's really useful to know how they are implemented, and when you have a good understanding of that, you shouldn't have trouble using a particular variant, since they are implemented in similar fashion. Particle engines can even come with editors that provide a WYSIWYG way to edit their properties.

If the effect you need can be pulled of in a sprite sheet based particle effect, I would recommend TimelineFX. It can be used to create stunning effects quickly, and has a big library of effect you can use and modify. Unfortunately, it's not the most intuitive tool, and hasn't been updated in a while.

ProgrammingPlatform AgnosticFlash
Did you find this post useful?
Yes No
Would you like to provide feedback (optional)?
Cancel Submit
Want a weekly email summary?
Subscribe below and we’ll send you a weekly email summary of all new Game Development tutorials. Never miss out on learning about the next big thing.
Sign up

Tomislav Podhraski
I'm a game developer with a passion for programming and graphic techniques, while also dabbling in design from time to time. At the moment I'm working on a small team making games for mobile, desktop and web. You can find out exactly what at Just Pine Games.
Download Attachment
Looking for something to help kick start your next project?
Envato Market has a range of items for sale to help get you started.