Coding Destructible Pixel Terrain: How to Make Everything Explode

In this tutorial, we'll implement fully destructible pixel terrain, in the style of games like Cortex Command and Worms. You'll learn how to make the world explode wherever you shoot it - and how to make the "dust" settle on the ground to create new land.

Note: Although this tutorial is written in Processing and compiled with Java, you should be able to use the same techniques and concepts in almost any game development environment.

You can play the demo yourself, too. WASD to move, left click to shoot explosive bullets, right click to spray pixels. 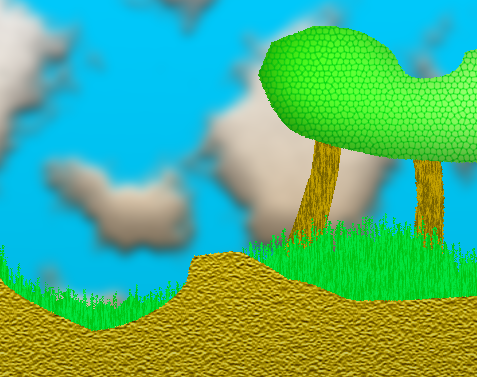 In our sidescrolling sandbox, the terrain will be the core mechanic of our game. Similar algorithms often have one image for the terrain's texture, and another as a black and white mask to define which pixels are solid. In this demo, the terrain and its texture all are one image, and pixels are solid based on whether or not they're transparent. The mask approach would be more appropriate if you want to define each pixel's properties, like how likely it'll dislodge or how bouncy the pixel will be.

To render the terrain, the sandbox draws the static pixels first, then the dynamic pixels with everything else on top.

The terrain also has methods for finding out whether a static pixel at a location is solid or not, and methods for removing and adding pixels. Probably the most effective way of storing the image is as a 1 dimensional array. Getting a 1D index from a 2D coordinate is pretty simple:

In order for dynamic pixels to bounce, we'll need to be able to find out the surface normal at any point. Loop through a square area around the desired point, find all the solid pixels nearby and average their position. Take a vector from that position to the desired point, reverse and normalize it. There's your normal!

The black lines represent the normals to the terrain at various points.

Step 2: The Dynamic Pixel and Physics

The "Terrain" itself stores all of the non-moving static pixels. Dynamic pixels are pixels currently in motion, and are stored separately from the static pixels. As the terrain explodes and settles, pixels get switched between static and dynamic states as they dislodge and collide. Each pixel is defined by a number of properties:

In order for the pixel to move, its position needs to be forwarded with its velocity. Euler integration, while inaccurate for complex simulations, is simple enough for us to efficiently move our particles:

The elapsedTime is the amount of time elapsed since the last update. The accuracy of any simulation can be entirely broken if the elapsedTime is too variable or too large. This isn't as much of an issue for dynamic pixels, but it will be for other collision detection schemes.

We'll use fixed-size timesteps, by taking the elapsed time and splitting it up into constant sized chunks. Each chunk is a full "update" to the physics, with any left over being sent into the next frame.

Detecting collisions for our flying pixels is as simple as drawing some lines.

Bresenham's line algorithm was developed in 1962 by a gentleman named Jack E. Bresenham. To this day, it's been used for drawing simple aliased lines efficiently. The algorithm sticks strictly to integers and uses mostly addition and subtraction in order to efficeintly plot lines. Today we'll use it for a different purpose: collision detection.

I'm using code borrowed from an article on gamedev.net. While most implementations of Bresenham's line algorithm reorders the drawing order, this particular one allows us to always scan from start to end. The order is important for collision detection, otherwise we'll be detecting collisions at the wrong end of the the pixel's path.

The slope is an essential part of Bresenham's line algorithm. The algorithm works by splitting up the slope into its "rise" and "run" components. If, for example, the line's slope were 1/2, we can plot the line by placing two dots horizontally, going up (and right) one, and then two more.

The algorithm I'm showing here accounts for all scenarios, whether the lines has a positive or negative slope or if it's vertical. The author explains how he derives it on gamedev.net. 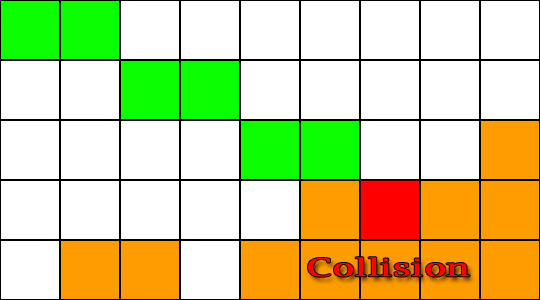 The dynamic pixel can do one of two things during a collision.

The angle either side of the normal is the same. 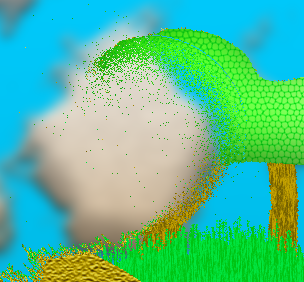 Bullets act exactly like dynamic pixels. Motion is integrated the same way, and collision detection uses the same algorithm. Our only difference is the collision handling

After a collision is detected, bullets explode by removing all static pixels within a radius, and then placing dynamic pixels in their place with their velocities pointed outwards. I use a function to scan a square area around an explosion's radius to find out which pixels to dislodge. Afterwards, the pixel's distance from the center is used to establish a speed.

The player isn't a core part of the destructable terrain mechanic, but it does involve some collision detection which will be definitely relevant to problems that'll arrive in the future. I'll explain how collision is detected and handled in the demo for the player.

Thousands of pixels are being handled at once, resulting in quite a bit of strain on the physics engine. Like anything else, to make this fast I'd recommend using a language that's reasonably fast. The demo is compiled in Java.

You can do things to optimize on the algorithm level as well. For example, the number of particles from explosions can be reduced by lower the destruction resolution. Normally we find every pixel and turn it into a 1x1 dynamic pixel. Instead, scan every 2x2 pixels, or 3x3, and launch a dynamic pixel of that size. In the demo we use 2x2 pixels.

If you are using Java, garbage collection will be an issue. The JVM will periodically find objects in memory that aren't being used anymore, like the dynamic pixels that are discarded in exchange for static pixels, and try and get rid of those to make room for more objects. Deleting objects, tons of objects, takes time though, and every time the JVM does a cleanup, our game will freeze briefly.

One possible solutions it to use a cache of some sort. Instead of creating/destroying objects all the time, you can simply hold dead objects (like dynamic pixels) to be reused later.

Use primitives wherever possible. For example, using objects for positions and velocities is going to make things a little harder for the garbage collection. It would be even better if you could store everything as primitives in one-dimensional arrays.

Step 8: Making it Your Own

There are many different directions you can take with this game mechanic. Features can be added and customized to match any game style you'd like.

For example, collisions between dynamic and static pixels can be handled differently. A collision mask under the terrain can be used to define each static pixel's stickiness, bounciness, and strength, or likelihood of getting dislodged by an explosion.

There are a variety of different things you can do to guns as well. Bullets can be given a "penetration depth," to allow it to move through so many pixels before exploding. Traditional gun mechanics can also be applied, like a varied rate of fire or, like a shotgun, multiple bullets can be fired at once. You can even, like for the bouncy particles, have bullets bounce off of metal pixels.

2D terrain destruction isn't completely unique. For example, the classics Worms and Tanks remove parts of the terrain on explosions. Cortex Command utilizes similar bouncy particles that we use here. Other games might as well, but I haven't heard of them yet. I look forward in seeing what other developers will do with this mechanic.

Most of what I've explained here is fully implemented in the demo. Please take a look at its source if anything seems ambiguous or confusing. I've added comments to the source to make it as clear as possible. Thanks for reading! 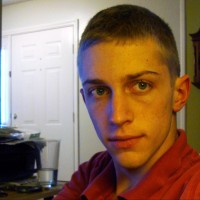 Jared Counts
I'm a student at Massachusetts Institute of Technology. Before, I programmed interactive toys and physics simulations as a hobby. My portfolio is at http://jaredcounts.com and you can find me on Twitter: @BlueThen
Weekly email summary
Subscribe below and we’ll send you a weekly email summary of all new Game Development tutorials. Never miss out on learning about the next big thing.
Advertisement
Download Attachment View Online Demo
Translations