Battle Circle AI: Let Your Player Feel Like They're Fighting Lots of Enemies

Melee fighting is a favorite pastime in videogameland, the core of countless series both well-known and obscure, and a tense and gripping experience when done right. Many a game developer has taken a game of two beings biffing it out until one can biff no more and thought, "this would be so much better if there were tons of baddies!" Sometimes this is true, but often the sum is greater than its parts, and fighting lots of "baddies" at once isn't as exciting, deep, or nuanced as fighting one at a time.

Many melee combat games don't use any particularly special AI when fighting multiple opponents. This often means that fighting two opponents is exponentially harder than fighting one, because they'll both attack at the same time but you can only really retaliate against one of them. In the worst cases, when fighting hordes of enemies, this can mean that the optimal strategy is to lead the enemy into a single-file line, then attack them one at a time while backpedaling! That doesn't feel very fantastic or exciting, does it?

Enter the "battle circle". This is a piece of AI code that tells enemies to intentionally encircle themselves around the player and only attack when the player has a chance to react. This forces enemies to fight in a style and tempo that's a lot more fun for the player... even if it's actually a really bad fighting tactic!

The main reason you'd want to use battle circles is to let the player feel like they're fighting many enemies at once, without actually facing the real challenge of fighting many enemies at once. Thus, at its very core, a battle circle is an illusion. You're intentionally making things easier for the player so they can experience the fantasy of taking on a bunch of dudes at once and knowing you're going to come out alive, just like in any martial arts movie.

A battle circle doesn't have to work the same way for every game; if you choose to use one you must spend time tailoring it to your game. On one end of the spectrum, you have "cinematic" battle circles, like in Assassin's Creed or Batman: Arkham Asylum, where enemies patiently wait their turn before attempting to attack, and give the player plenty of warning to deal with incoming attacks. On the other end, you have "dangerous" battle circles, like in Dark Souls, where enemies will try to stay out of each other's way, but otherwise have no problem mobbing you en masse.

This concept can be simplified further as simply managing the amount of pressure on the player. Specifically, this is the amount of motivation the player has to react to the enemies in the battle circle. A low-pressure circle will let the player wait for incoming attacks to counter, or proceed to attack a particular enemy without immediate retribution. A high-pressure circle will force the player to pick "fight or flight" as soon as they are in the circle, so that entering the circle in the first place should be a premeditated tactical decision. While inside such a dangerous circle, the player must immediately decide who to attack, who to counter, and when and how to escape.

I've provided a fully-functional, if minimalistic arena-style beat-em-up in the example Unity files. If you don't use Unity, you should still have a rough idea of how to adapt the battle circle code to whatever language and engine you're using. The files you'll be interested in are EnemyMob.cs and SwordzPlayer.cs.

The battle circle AI basically works like this (from an enemy's perspective):

First, walk towards the player until I get within a "danger" radius

While in "danger" mode, don't get too close to another enemy, unless I am given permission to attack the player. (See Avoider.cs.)

Also while in "danger" mode, try to approach the player. If there are too many enemies in my way, I will effectively not be able to reach the player until the enemies move or the player moves.

When the player is in my "attack" radius (roughly the maximum range of my attack) ask the player if I'm allowed to attack. If so, add me to the list of current attackers on the player object. (See SwordzPlayer.cs.)

The maximum allowed number of simultaneous attackers (simultaneousAttackers in SwordzPlayer.cs) is critical in balancing your battle circle. A higher number causes an exponential increase in pressure. In the example demo I have it set at 2; less twitchy and more "cinematic" games set it at 1. If you put this number too high, you defeat the purpose of the circle, because large groups of enemies become unassailable or can only be defeated with uninteresting poke-and-run tactics.

Of similar importance is the enemy attack rate (attackRate in EnemyMob.cs). This is not the fastest possible attack rate of the enemy, but how often they will choose to attack when given permission. As you would expect, a lower number increases pressure, but you should generally have this be several times higher than the real attack rate. You can make this rate a bit more unpredictable (and thus the amount of pressure slightly less predictable) by increasing attackRateFluctuation, which will increase or decrease the attack rate after each attack.

Using this system, you have the basic means to create that illusion of power that makes it a lot more fun for your players to fight lots of enemies at once.

There are tons of minor changes and additions you can make for combat inside the circle to be even more interesting:

So get those creative juices flowing! This is just the beginning: make the battle circle a core part of your gameplay, and make your own version of the circle that fits well with your game. 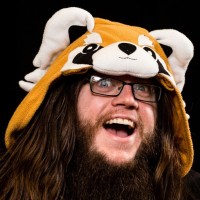