If you think developing a game is hard, try doing it with someone you don't know located on the other side of the world. In this tutorial, I'll share the fundamentals of developing a pipeline and improving your team's workflow in those cases where each member of the team is in another timezone. Let's get started! 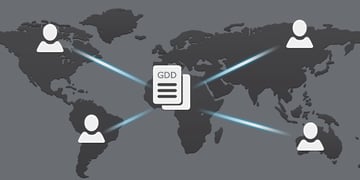 No matter how simple your game idea is, you need a Game Design Document, or GDD.

The GDD is the backbone of the project and is particularly important when making international collaborations because you must have every member of the team aiming for the same goal from the very beginning of the project - otherwise, the team is likely to bump into unexpected obstacles later on.

There are different ways to lay out a GDD, but you definitely want it to include the following elements:

Once you've started developing the game, the team might have additional ideas that they would like to implement. Be careful: this can make the team wander! Just write them down and have them in mind for a possible sequel.

Zen Sudoku's Board in Trello

Tip: It really doesn't matter what type of software you will be using, be it online, offline, paid or free. The most important thing is that you and your team feel comfortable with it and that you understand the principles and best practices behind every step.

The best way to manage a project is using a project management tool. Believe me, I've tried almost all of them, from Basecamp to Zoho. My personal favorite is Trello because it's simple, straightforward and optimal for small teams.

The features of almost all project management software are very similar. In the case of Trello you can manage several projects known as "Boards". Boards are made up of multiple lists of "cards" - the basic units of the board - which can contain comments, checklists, attachments and due dates. Cards can be dragged from list to list, which gives a lot of flexibility during the production phase.

Your project management software should allow the team to have an entire overview of the project at any time - that way each person can see what they have to do, and what others are doing. (I'll explain the reason for this in Step 4.)

The bigger the project, the more tasks need doing. To keep things organized, I suggest color coding every task and sorting them vertically in descending order of priority.

I color code tasks based on the team member assigned to work on them, but you might want to color code tasks in terms of planned or implemented tasks; if the programmers have their own board, they might color code bugs and features in a way they understand.

The most important thing is to make sure that all the people involved in the project know what the colors mean. You can describe this in the GDD.

Tip: Having a web-based project management tool has a lot of benefits when working with people in other timezones: they can work anywhere, there's no need to install software, most of the tools have integrated mobile functions, and all changes are propagated instantly. 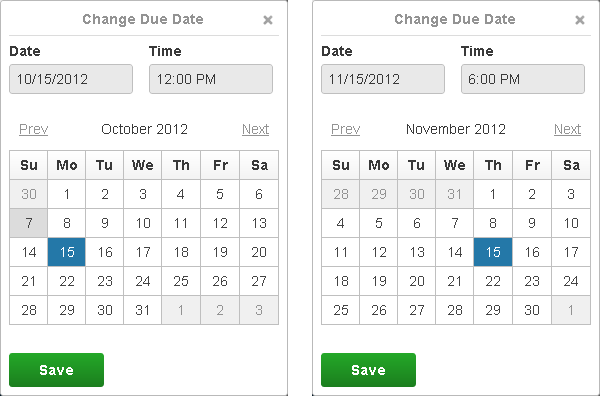 Due dates are definitely the most underused feature by game development teams that are just starting.

There's a big difference between having a to-do list and having a schedule, and you need to realize that it's vital that you set dates for everyone in the team. This way, everyone knows when to expect things, and everyone will be looking forward to the next milestone.

Tip: Having good scheduling practices can save a lot of time and money, especially when outsourcing work. Most freelancers charge daily or hourly and if you welcome them with a tidy schedule they will appreciate it - as will your wallet!

Another aspect of development that you must cover before starting is the structure and location of the files that will compose the game.

There are many different tools that synchronize files; personally I use Dropbox. It's intuitive, it's easy to use, it lets everyone on my team access the files via the web and lets me restore files if someone accidentally deletes them.

When creating the project folder that will be shared with all members of the team you want to pick something that can be easily understood. Of course, there are different ways to do this according to your needs and the needs of the team, but I recommend something along these lines: 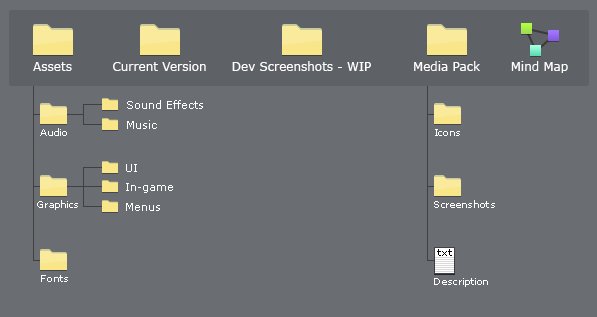 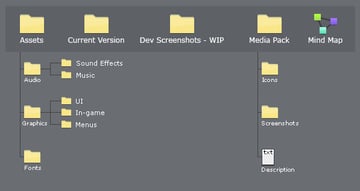 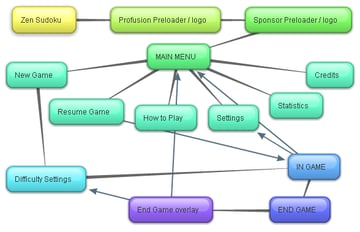 Mind map for one of my games, showing the connections between screens and how the player can navigate through them

When you're working in a physical location with others, you can talk with them at all times and see they're focused working. But the only feedback that you're getting when working with an international team is through each person's output. This is why many international efforts in game development are unsuccessful.

Tip: It's critical that you keep communicating with your teammates on a daily basis to maintain the team attitude and drive towards reaching the goal.

I've made successful and unsuccessful projects in the past, and one of the most important things that I've learned is that no matter how much your team loves making games, their morale will have its ups and downs. In the following image I will explain some of the stages that a team goes through.

This is a morale curve: it represents emotional cycles people go through. Gamedev teams go through similar transitions.

Some Tips to Maintain Morale

Hopefully this tutorial has given you a good understanding of the different phases of international collaborations and its advantages as well as pitfalls. Of course, the best way to keep learning is by making those collaborations. I encourage you to assemble an online team and develop a simple game following this tutorial.

David Arcila
Hi! My name is David Arcila and I’m an independent game developer, audiovisual producer and avid gamer. I’m also the co-founder of ProfusionGames.com a small dev team where we strive to make fun and engaging games. You can play my games and see more of my work at davidarcila.com
Looking for something to help kick start your next project?
Envato Market has a range of items for sale to help get you started.