Every game must find a balance between the two opposing forces of luck and skill. You might not care, but your players do: if you don't consider this dynamic, then you risk alienating a large portion of your audience. Let's examine why luck vs. skill is important, and why players care.

Since the advent of home computing, gaming has entered a new golden age. While it may be coincidence, areas such as card and board gaming have likewise exploded. The rise of eurogames such as Settlers of Catan and Carcassonne have become incredibly popular with gamers, largely due to their mix of simplicity, fun and depth.

It seems a like a terrible shame, then, that when you talk to non-gamers about board games, they tend to imagine chess or Snakes and Ladders - and while these games may be incredibly popular, they have major design flaws. Although chess aficionados may now be frothing at the mouth in rage, the sad fact is that if either of these game were to be released today, they would be consigned to obscurity forever. They both epitomise the extremes of "skill vs. luck" and game design is a fine art, where balancing skill and luck is a necessity. 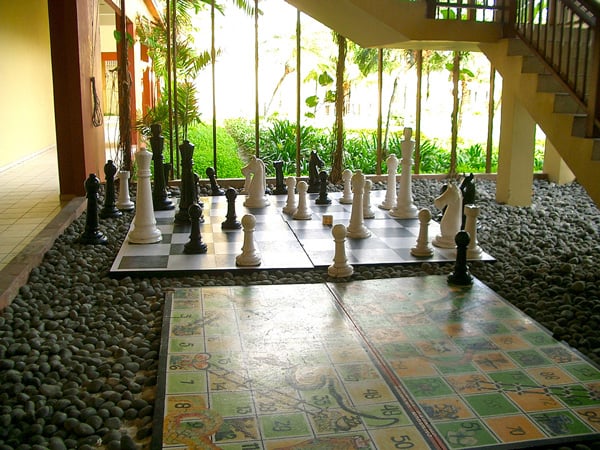 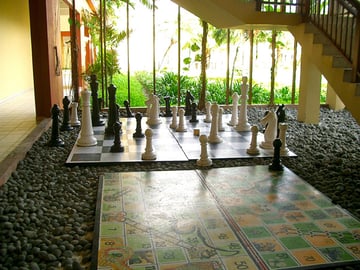 The flaws of Snakes and Ladders are fairly evident. Players take turns rolling dice, and the first person to reach the end marker wins. The game is 100% luck based: a player can not choose to influence his victory or loss in any way. Chess, at the other end of the spectrum, is probably around 95% skill based. There is some luck involved, which comes from the players themselves: without that human element of luck, every game would be predetermined. However, because of the high skill factor, most games are foregone conclusions, which is one of the reasons chess can be hard for new players to get into.

It's a simple fact that players enjoy winning games: and when a player new to chess finds themselves being repeatedly stomped, they draw the conclusion that chess simply isn't a fun game, and they abandon it.

This "winning is fun" mentality is at the heart of the luck vs. skill balancing act. There is really no "right" way to design a game: you can make a game that critics laud as a perfect embodiment of great design, and someone out there will find it stupid and boring. What you can do is make a game that is perfect for your key demographic, and remember that the people that play Snakes and Ladders are not the same people that play chess.

Who actually plays Snakes and Ladders? It is seen as a children's game, which makes sense - children, still developing, generally don't have the mental skill for a complex game like chess. Snakes and Ladders lets them compete with their parents on an equal footing: they stand a chance at winning, which is what players want from a game. 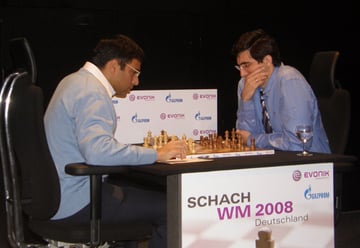 You rarely see this much concentration in a game of Snakes and Ladders.

The desire to play games of luck is not limited to children, however; swarms of pensioners converge on Bingo halls every week. While the setup may be different, the game is the same: randomise numbers until someone wins. No skill, no pressure. Conversely, the chess players want to move away from this random element. They have spent time honing their skill level and want a game which lets them flex their mental muscle; chess rewards them for the time they have invested honing their skill.

There is a a game which combines high skill elements with high luck elements. It's a game which is popular with gamers and non-gamers alike, a game so popular it has a multi-million dollar gaming circuit.

That game is, of course, poker. And while poker is far from a perfect game, it combines these two gaming elements smoothly and seamlessly. Gameplay is consistently random and a single hand of poker is almost entirely luck based. The skill comes from betting: being aware of your chances of winning, the value of the pot, and being able to optimise your gains over the course of a game. You won't win every hand, but if you're a good player, you can choose which battles to fight to win the overall game.

What About Computer Games?

The world of computer games is subject to the same rules that board and card games are. There are even corollaries: Chess and Starcraft both have roots in wargaming, and share similar gameplay elements of strategy and foreplanning. A game like Snakes and Ladders may not have a direct comparison, but there are plenty of games which have a high luck content -- Peggle is perhaps the most obvious contender, as although it's possible to judge the initial aim of the shot, anything after a few bounces is pot luck. 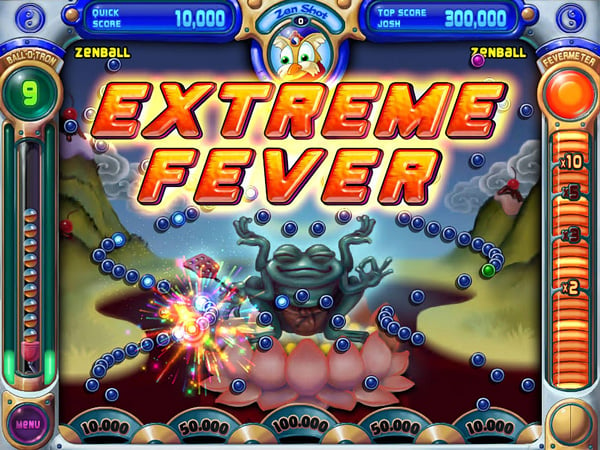 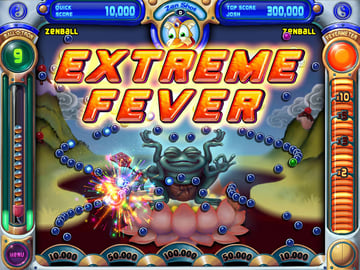 Peggle is massively popular, largely because of its positive feedback: any time the player does something simple, such as shooting the ball, points shoot up and sparkly graphics appear. The addition of the moving basket at the bottom adds additional thrills if you are lucky enough to hit it. It's the gaming equivalent of a roulette machine, albeit one that's not afraid to "pay out". Non-gamers can play Peggle and feel the reward of doing well, despite having had very little effect on the actual outcome.

It would be very easy to offhandidly discard luck vs. skill in computer games as a natural extension of the casual vs. hardcore mentalities. Similar to Snakes and Ladders vs. chess, casual gamers want to compete on an even playing field where they stand a chance of winning, and hardcore gamers want to test their gaming prowess. This is true to a large extent, although in many cases it's used as a "balancing" mechanism. This ensures, to some extent, that hardcore gamers do not dominate these games. 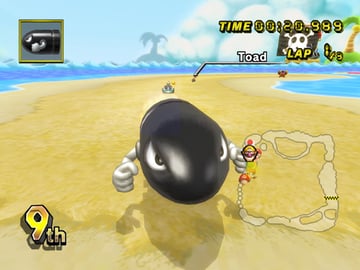 Mario Kart famously uses an item system to boost poor players. Players leading the race typically receive "trash" items such as banana skins – a cartoon land mine, at heart - which do very little to propel them forward. Players at the rear of the pack are almost guaranteed to get a powerful item, however, such as a Bullet Bill (which automates driving, provides a huge burst of speed and knocks other players aside) or lightning (which cripples all other players temporarily).

Although the racing game underneath may require a high skill level to play efficiently, the unpredictable nature of items overshadows it, making Mario Kart a game where picking up the right item at the right time is more important than being able to corner well. This fits in well with Nintendo's family-friendly attitude which, generally speaking, is more geared towards "casual" gaming than the Xbox 360 or PS3 audience.

Meanwhile, on the PC, Team Fortress 2 has a "critical hit" system which has drawn much ire from the pro gaming community. Upon firing a weapon, there is a random chance for that shot to be "critical" – and being hit by a critical shot is almost guaranteed death. 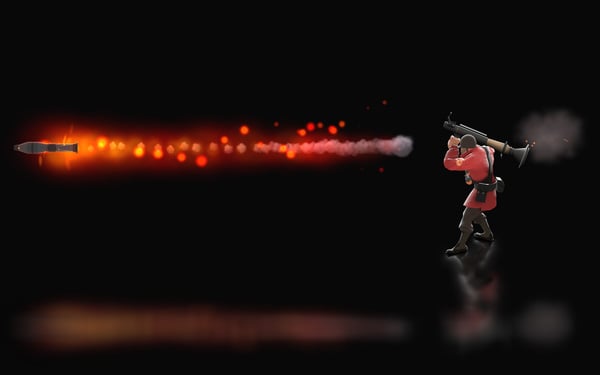 While most of the game is relatively well balanced, critical hits are a wild card for players to deal with; although it may feel good to gib a group of enemies with a well placed critical rocket, it can swing games in massively unpredictable ways. And while pro players may continue to hate on critical hits, many lower skilled players love them. It can give a player a sense of power, as well as letting poorer players contribute to a team... with a little luck.

This leads to a very clear distinction between the concepts of randomisation and luck within games: luck changes games. If a race can be won or lost on the toss of a coin, then that can be considered luck. Randomisation tends to non-critical, or applied often enough that a single coin flip has very little impact on the outcome of the game. Tetris is a perfect example of this: the whole game may seem luck-based, but because the player may be required to deal with hundreds of these random shapes throughout a playthrough, the game becomes skill-based.

A single player game can have an incredibly high luck factor, and as long as they player wins, they will feel satisfied. For multiplayer games, however, the balance is much more important. If a game is too "hardcore", then new players will find themselves being dominated by seasoned pros and leave, crippling growth. If a game is too luck based, then players will generally get bored by the pointlessness of repeated plays.

Facebook players don't want to be reminded how bad they are at games, they want to click on squares and feel accomplishment.

Who is your game aiming for? To what extent can you add or remove luck? Most games will require a certain element of both, although the human factor should never be overlooked. An FPS or RTS can do well with no internal randomisation whatsoever, as the unpredictable nature of human vs. human combat provides its own randomness.

Conversely, a Facebook game will require little to no skill, as you want to hit as many players as possible, and that requires targeting the casual gamer (or even non-gamer) market. The image of middle-aged housewives clicking on farm squares may be cliched, but there is a truth in it. They don't want to be reminded how bad they are at games, they want to click squares and feel accomplishment.

The casual world of luck and the hardcore world of randomisation both have their merits and flaws. As game players, we may all have our own preferences, but as game designers, we have to use a careful hand. People play games to have fun, and when they lose, they stop having fun. Know who your market is, and make sure they feel that sense of gratification when they play.

Darran Jamieson
Games Dev / Scotland
Darran is an indie developer who spends most of his time ranting about games design to anyone within earshot, and cursing at obscure code errors. On occasion, he actually releases games, most of which you can find on his website.
Weekly email summary