The Benefits of Reviewing Other Developers' Games

Like most people of the world, I love being a critic. When it comes to sharing my opinion on something I care about, I can't really be stopped -- and I care a lot about video games. I've been reviewing games since before I can remember, whether verbally to friends or, more recently, as written critiques for fellow developers in need of some good feedback. That being said, being a reviewer has been extremely beneficial to me as a developer, and I'd love to share why.

Having an Eye for Detail

One of the most important skills to have as a game developer, is an eye for detail. When creating a piece of art - a painting, a piece of music, a game - it becomes extremely hard to find faults with your own work. One of the few things that helps with this, aside from taking a step back, is a good eye for detail.

While some people are born with this skill, like natural artists, I believe it's a skill that anyone can develop with practice. Like all game developers, I've made something I thought was absolutely amazing, and have been completely blind to its faults. Over the years, I've exposed myself to countless games, and critiqued nearly all of them. Even when I'm just playing for fun, I can't help but break a game down. Over time, this has given me the skills to spot almost any fault, with any game, my own included. As a developer, that skill is invaluable.

When it comes to swapping reviews with other developers, I've found that you generally get what you give.

As game developers, it's crucial that we receive feedback on our games before they are released. But more specifically, it's important that we receive quality feedback. When it comes to swapping reviews with other developers, I've found that you generally get what you give. While occasionally someone else will get totally sucked into a game, and end up leaving a fantastic review just because they wanted to, this isn't the rule, it's the exception. You get what you give. With that in mind, it becomes very important that you are capable of giving quality reviews, in order to receive the same back.

As a moderator on the FGL forums (members only link), I've written many reviews and read countless more. I also run a consulting service where I give a complete written breakdown of games, many of which appear on FGL. As a result, I've earned myself a decent reputation as a reviewer within the community, and have even become the only member of FGL to acquire a "level 10 player" status.

While that's a wonderful title and all, the reputation within the community is what's of true value here. Due to this reputation, it's now easy for me to acquire quality feedback on my games from fellow developers, as when it comes to exchanging reviews, they know they can expect detailed feedback in return. This in turn leads to me receiving invaluable feedback on what works and doesn't work in my game that even I couldn't spot due to my close nature with the project.

I won't share other developers' private feedback here, but I will share a quote taken from the JayIsGames review of Tower of Greed (pictured): 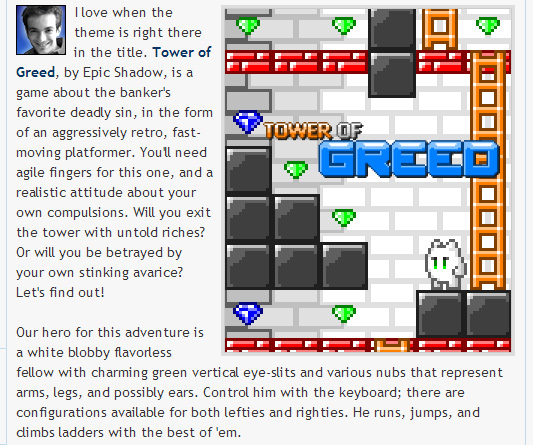 The enemies are perhaps not such a great design decision. They too move with incredible speed, especially the vicious, ladder-climbing Snail Shark, but they can't kill you directly. Their goal is to delay you until the auto-scroll catches up, or possibly just knock you off a platform. Randomly appearing creatures that move too fast to be avoided are annoying, not fun. Annoying annoying annoying. They should have been stripped from the game and tossed in a juice-maker.

Now, my opinion doesn't align perfectly with this quote, but this has helped me to identify an area that needs work, which let me determine how to fix it. Getting this kind of feedback from other developers before the game is released is obviously even more helpful!

All in all, my ability to help others directly relates to how well I can help myself.

Reviewing Other Games Helps You, Too

As a game developer, the benefits of reviewing games are unparalleled. I suggest reviewing games of all genres, and of varying quality, ranging from quite horrible to absolutely amazing. By exposing yourself to and reviewing such an assortment of games, you'll build a mental database of everything that works, and doesn't work, for nearly any game you could possibly create.

For the offbeat creations you may or may not get to, you'll have developed an eye for detail so potent that you'll know what works and what doesn't, whether you've experienced it before or not.

Perfectionism Is a Gift, Not a Curse

A lot of people claim to have writer's block due to perfectionism. They have a hard time creating something that meets their own standards. While this can be a burden, the negative is far outweighed by the positive.

Someone with a poor eye for detail may create more frequently, but those creations tend not to be as polished and mature as those of someone who can see their creation from every angle. While it can be argued that more development means an increase in skill, that doesn't necessarily mean the proper skills will be developed. Yes, you'll get faster at programming, creating art, and so on, but rapidly spitting out pieces of work won't open your eyes as to why that work is what it is.

I've found that developers who refuse to accept any standard short of perfection don't finish projects as frequently as they'd like, even though their maximum capabilities tend be be higher than those who don't claim to be perfectionists. This is a blow, but it's not an impossible object to overcome: the key is to spot why your creation isn't meeting your high standards. Building your skills as a reviewer will give you the experience necessary to spot what you don't like about your project, and knowing is half the battle.

Enhancing your eye for detail is no quick task, but that doesn't mean it's hard. There are a number of things you can do to slowly build your skills, and I promise you that if you follow them, you'll notice very consistent, gradual results, almost instantly.

Go Forward and Critique the World

With the amount of feedback I've got as a reviewer, it's no mystery to me that my nature of critiquing everything has paid off. Without tooting my horn, I've clearly built an eye for detail, and others seem to agree with me. I'm now capable of helping my fellow developers, which in turn helps myself. I'm a huge fan of helping developers build great games, and in doing so, they help me in return, and we all help build a stronger community of game developers.

I hope I've convinced you of the benefits of being a game reviewer, and I hope you'll take my suggested practices into consideration for your future as a game developer.

Porter
I'm a game developer, professional game consultant, and avid gamer. I've been playing games since the age of three, and have loved everything about them since before I can remember. To keep up on my current projects, and overall view of the game industry, check out my developer blog, and follow me at @Gemfruit.
Weekly email summary
Subscribe below and we’ll send you a weekly email summary of all new Game Development tutorials. Never miss out on learning about the next big thing.
Advertisement
Translations