When designing, developing and testing games we all have our own ways to approach the problems that arise. Nevertheless we have to step outside of our position of developer to comprehend the complexities that lay ahead in the relationship between our players and our game. Follow me in a journey that will give you new perspectives as a game designer!

What Is the Deck of Lenses? 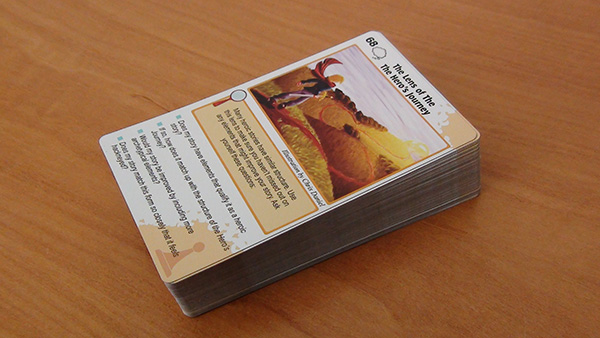 The full name of this deck of cards is "The Art of Game Design: A Deck of Lenses". That name might sound familiar to you, and it's because this deck of cards is a supplement of the famous "The Art of Game Design: A Book of Lenses" book by Jesse Schell. This is a widely known book that teaches the basic principles of game design and encourages readers to become better game designers.

This deck of lenses is basically a creativity toolkit with 100 unique cards that feature very important questions aimed towards improving your game. All the cards reach different aspects of game design such as game mechanics, story, creativity, playtesting among many others. One of the great advantages of the book and the deck is that even if you're a novice or expert game designer you and your game can greatly benefit from both of them.

So, if you want to have a more deeper understanding of game design and the different uses of each card I strongly suggest you also get the book, but bear in mind that you don't necessarily need it to use the deck.

Where to Get the Lenses

Instead of telling you at the conclusion of this article where to get the lenses, I want to tell you right now, because you can get them for free and use them while you read. And yes I said free! You can get the lenses as an iOS or Android app for no cost, or you could buy the physical cards.

Now that you know where to get the cards, let's look at how to get the most out of them.

The Anatomy of a Lens

Before we get to play with the lenses, we must know the different aspects that are included in each card:

Each lens has one or more symbols that show how they relate to game design. There are five different symbols in total:

This type of lens is related to the experience a player has when they play your game.

The Board Game Playing Piece

This type of lens is related to the player.

The Pair of Dice

This type of lens is related to the game or the game mechanics. 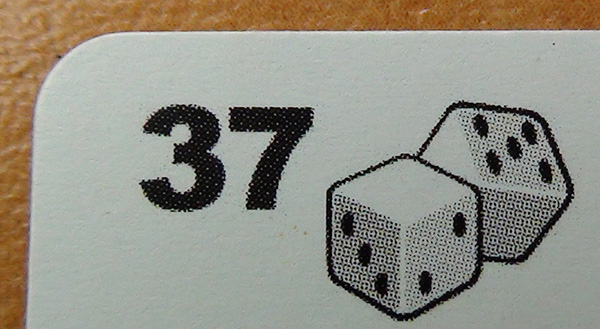 This type of lens is related to the process of game design and game development.

This type of lens is related to you, as a designer.

Tip: The symbols can also be used as card suits if you want to design games to play with the deck of lenses.

Let's Look Through Some Lenses

Now that you understand the different elements that compose a lens it's time to use them. Let's start with a lens related to the player's experience: The Lens of Story.

Tip: I strongly recommend having a pencil and a sheet of paper while playing with the lenses. That way you can get away from the computer and write down your ideas, thoughts or draw doodles accordingly.

The Lens of Story

This lens provokes the reader into pondering whether the game really needs a story. Keep in mind that there are lots of videogames that have a story that naturally takes shape through gameplay, making it even more powerful and meaningful, while other games have no story at all. For example, Minecraft establishes a deep connection with the player even though it doesn't have a story; it serves as a platform where players can create their own.

The Lens of Visible Progress 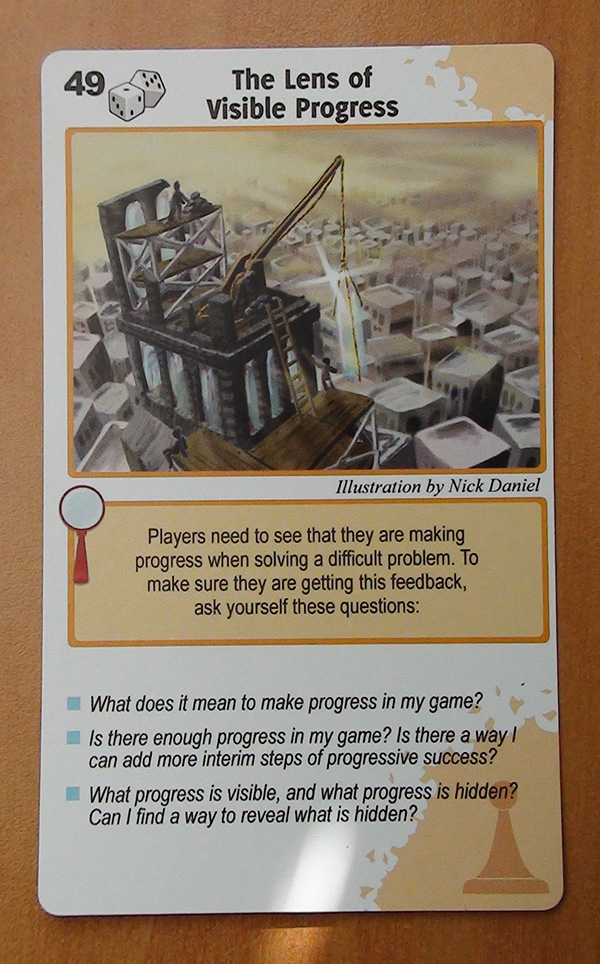 This is a lens related to the game or the game mechanics. It was very useful when I was designing my game miniQuest: Trials.

I noticed at an early design phase that I wasn't clearly conveying the process the player was making when playing the game, thus making players confused about their expectations. That's why I designed a playable level selection screen where you could unlock doors, and why I also changed the colors of each floor to make the progress more visible.

The Lens of the Toy

Sometimes there's a thin line between what is a game and what is a toy. Is having a goal really that important to your game? Garry's Mod and Kerbal Space Program are two great games that have toy attributes. Both games are basically like having a virtual toolbox, where you can build whatever you want with only your imagination as a limit.

It's incredible that I can spend several hours playing a game that has no story and no goals (other than the goals that I create for myself), but that it's still fun and engaging.

Some lenses in the deck can be easily reversed, thus expanding their uses. What do I mean by "reversed"? Well, let's take a look at two examples:

The Lens of the Hero's Journey 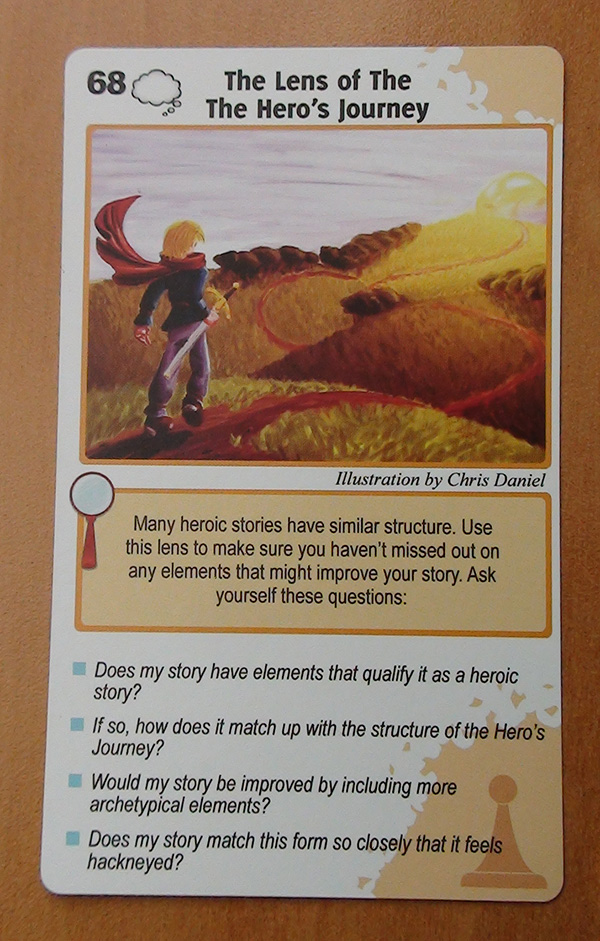 This card describes the hero's progression along the story, but now let's think about the opposite side of the card: "The Villain's Journey". How about a game where you play as a villain in a journey to defeat the hero? How would a game play if you saw all the actions from the perspective of the villain?

The Lens of Pleasure

Or how about card #17, The Lens of Pleasure, which asks what kind of pleasures your game gives to the players? When reversing it, it becomes "The Lens of Pain". How would a game play if the players felt pain when getting game overs... how would that change the experience? Well, this has been done before! Check these 3 examples: Painstation, Dance Dance Immolation and Tekken Torture Tournament.

Tip: The more you play with the lenses and apply them to your games, the better you will eventually become. Improving your skills in game design is all about practice.

Different Ways to Use the Deck

As with any other card game, this one offers infinite ways to be played. Here are some that I've found interesting:

A Game Born From Questions

Using all the questions in the lenses, you can start building a game, you just need to follow your intuition and some simple guidelines to create something fun.

After that, think about how you can take that idea and make a game based on it. Use the lenses that feature a lightning bolt to guide you through the process of visualizing the game.

Now, you have to try it out! The only way to find out if your game works is by playing it, make a prototype using paper, dice, board game pieces, and so on. Once you've done this, determine what's wrong with it and change it so it's better. Use the cards with the thinking bubble symbol to aid you on improving the experience as a player.

Then go back and try the game again, and find out what's wrong with it. Repeat this cycle until you feel confident that you have a solid foundation to which you can add more complexity.

This is a method of using the deck that it's very powerful when you're stuck in a particular design problem. Start by organizing the cards according to their symbols; that way you will end with five groups of cards. Pick the group of cards that you think is where your game design problem is and keep it in your hand. Now sit on the floor and place the lasting four groups in this order: one group in front of you, one behind you, one at your left and one at your right.

Start reading the lenses in your hand one at a time and set aside the ones that you think may hold the solution to your problem. As soon as you finish reading a group, take the cards you set aside and mix them with the group in front of you.

Do the same with the groups on your left, to your right and behind you. Once you finish, take the pile in front of you and shuffle it. Now, read them once again and set aside the ones that you think hold the solution. At this moment you might or might not discard lenses that you thought were important before, this is completely normal.

Once you finish take the lenses you set aside and start taking notes on how you think that lens will solve the problem until the right way to improve your game is crystal clear.

Get every person involved in the development of the game, or that has played your game, and deal five cards to each of them.

Then, ask each player to order the cards from less important to more important regarding their influence on the current problem that you're trying to solve. Now each player takes turns to share one card with the group telling why he thinks that card is not the solution, and then discarding it after they speak.

At the end each person must have only one card, they have to share it with the rest of the group explaining why they think the solution to the problem is represented in that particular card and how they can apply that solution to the game from their role in the team.

After this you will find that often the solution to a problem becomes more evident when you first realize the strengths of your game and then you tackle the weaknesses.

Now You Do It!

I'm going to pick four lenses at random so that you can apply them to the following games:

Take your time and use what we've learned so far to find the benefits of each question.

After several years of using these cards with students in classes and workshops I've found that it's an excellent tool that sharpens your ability to look further as a game designer. After playing with the cards for a while you start to develop a sixth sense when it comes to the understanding of the different variables and problems that might arise in the individual aspects of your game.

I also recommend that you use the lenses with games other than your own - this way you force yourself to think how to break down different games' components and improve them as you play or watch others playing.

I'm sure you will find different ways to use the lenses and improve your game designs. Thanks for reading!

If you enjoyed this, check out my article on using the Game Seeds deck of cards to help you design characters for your game!

David Arcila
Hi! My name is David Arcila and I’m an independent game developer, audiovisual producer and avid gamer. I’m also the co-founder of ProfusionGames.com a small dev team where we strive to make fun and engaging games. You can play my games and see more of my work at davidarcila.com
Weekly email summary