At the core of every video game lies reward for the player. Whether this is an observable feature like experience points, or a message laying dormant in an art game until the final chapter, as players we need a reason to continue playing. It's common to argue that a game need only be "fun", without requiring a driving motivation to continue play - but even this suggests that factors within the game mechanic itself reward the player. In order to unravel the formula of these time sinks, I shall dissect my latest game Slay With Santa, created within a very tight time frame with the brilliant Wayne Marsh.

Anyone who develops games knows that a good idea can come in an instant after weeks of absent inspiration. When Wayne and I decided we'd like to make a Christmas themed game, we were lucky enough to instantly think of the core idea of what would eventually become Slay With Santa.

What was even clearer, in our short brainstorm, was that because we'd afforded ourselves nothing short of a pressing time frame with which to complete the game in (the two weeks leading up to Christmas) the game had to orbit around a rewarding game loop which basically 'fed itself'. In real terms, that means that certain elements of the gameplay had to complement what was already happening to propel the gameplay forward.

I'm not a huge fan of rhetoric so allow me to illustrate exactly what I'm talking about: 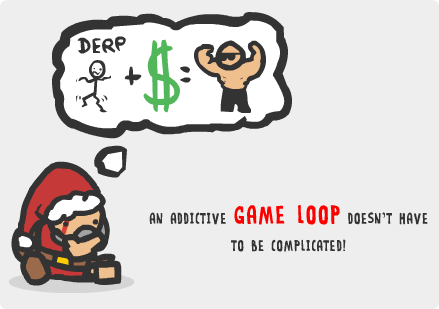 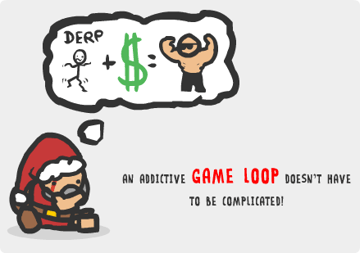 Our game, Slay With Santa, centres around nothing more than shooting zombies, grubfish, dual wielding gingerbread men, and my personal favourite, Horrorballs. This is essentially the complete game in a nutshell. We knew we had little time to make the game, so rather than come up with a long plot or extensive map to traverse, we settled on a simple two-screen arena.

To further establish the foundations of our game, there were some vital inclusions, not least of which was meticulous balancing. For now, let's focus on what we included at the start of the development process to enhance a simple two-screen shooter and make it as addictive as we could.

It is of course vital that as Slay With Santa is essentially a minigame, it has to be compelling to play prior to the addition of bells and whistles. Wayne spent considerable time making the core of the game - platforming - fun. The engine was completely polished and allowed for situations such as jumping from underneath a platform and landing on top of it, unlike many browser based platform games that make you bump your head if you hit it from underneath. 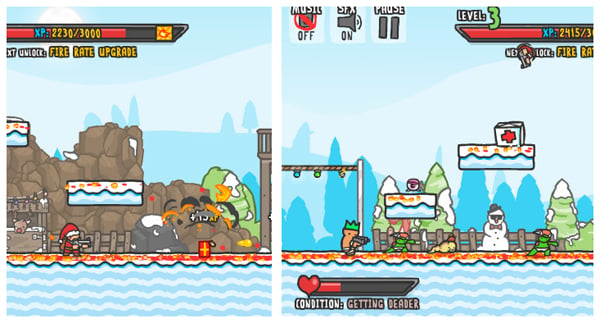 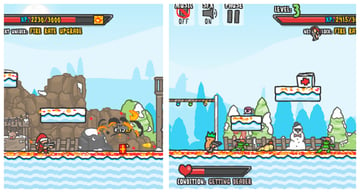 As it was set in a winter hinterland, I animated small touches such as clouds of cold breath, gun smoke, snow effects for running, jumping and landing, bullet shells that embedded themselves in the snow and some other little details. We also made sure that the shooting felt nice and chunky, prior to adding in any enemies. This was to ensure that the most important part of the game, shooting, was fun even before we added any obstacles.

The four types of enemies cover every base to present the player with a challenge: Range, Speed, Power and Height.

With the enemies added in, we had a fun mechanic working in a challenging 2D playing field. What was just as important was how fun it was to take these enemies out; they felt nice and juicy as particles flew around and splat sounds panned between the left and right audio channels.

Destroying enemies gains experience points for the players, who can spot their progress and current level at all times, as the top of the screen details what the next automatically unlocked ability is. We also included a score counter in the form of presents, which only zombies drop, and directly fed that into a worded ranking upon getting K.O'd to encourage another go.

As zombies occupy the lower tier only, and presents are the method for which we base the player's score, it provides a reason for the player not to 'camp' at the top of the stage, and simply keep attacking the Horrorballs: doing so would leave you scoreless and with a heavily populated zombie occupation down below. This also forces players to move around the level and collect presents before they fade away, once again balancing experience farming and score harvesting at the same time.

Those three core aspects make up what I believe to be a great formula for encouraging the 'just one more go' mentality that makes a game addictive. If we look at other successful games that use rewarding game loops or mechanics we can see the simplicity that compels players to continue. 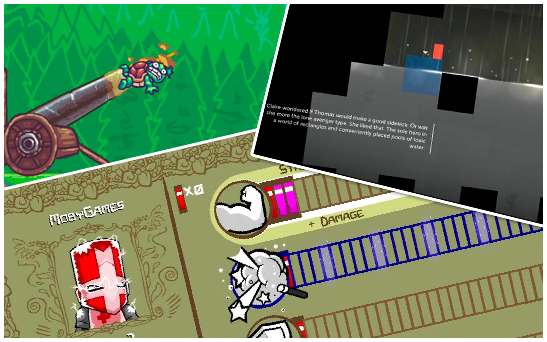 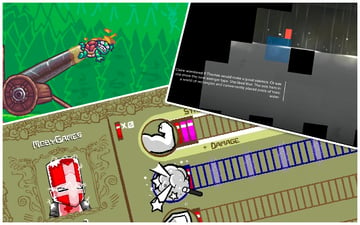 Toss The Turtle constantly dangles a carrot which promises further reachable distances, Angry Birds doesn't take long to remind you that you'll soon get a new character heralding extra destructive possibilities, and Castle Crashers has not only a cute story but also purchasable items, unlockables and attribute enhancements.

So when you have a prototype of a game but aren't sure where to go with it, one approach is to use some of the variables as "currency". This basically means allowing the player to make their character faster, or able to jump higher, after completing a set goal such as completing missions or collecting money from the enemies they destroy. They then advance to another round where they continue doing more of the same.

On the other hand, let's look at an indirect reward which contributes towards what the industry calls a game's 'stickiness'. Thomas Was Alone, at first glance an apparently bland indie platformer, reveals itself to be substantially more than what you could glean from screenshots. Look into how the game progresses, and we see the gradual introduction of new characters that can help solve puzzles, married to a charming narrative which sucks the players into its fiction.

Braid features the latter but with a unique hook in the form of time manipulation to assist in puzzle solving. And as frustrating as it is, we can use Super Meat Boy as an example of a game that pushes the player to keep trying thanks to the way it instantly resets the character's position directly after dying; players know that once they finally complete the level, they will be able to see their progression and are rewarded with the satisfaction of being able to view said progress layered in the unique real time replays. 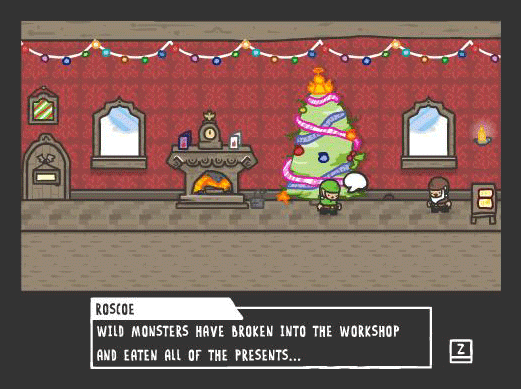 It sounds obvious, but a unique game hook can make the difference between an addictive game and one that gets overlooked or doesn't retain the player's attention as much as is possible.

Adding certain elements to your game, from upgrades and levelling up to unique game hooks and a compelling narrative, helps to keep your players' attention firmly focussed on repeat play; they are the difference between an addictive, fun game and a badly built, aimless one.

What might they unlock next? How will the story unfold? It's important to keep the aforementioned proverbial 'carrot-on-a-stick' well and truly dangling ahead of what is already laid out in your game. Alternatively, should you not wish to take this advice, you could always make an app where you dress up a biscuit.

Game Design
Did you find this post useful?
Yes No
Would you like to provide feedback (optional)?
Cancel Submit

Chaz Carter
I'm an indie game designer and artist based in the UK. Check me out at http://www.FlashChaz.com !
Weekly email summary