Have you ever wondered whether it would be possible to design a game by playing a game? Well, let me introduce you to Game Seeds, a card game designed to aid your brainstorm sessions in different and creative ways.

Note: Unfortunately, Game Seeds decks are sold out and currently not in print.

What Is Game Seeds?

Game Seeds was created by the Utrecht School of the Arts, Monobanda and Metagama as
a tool for designers, students and creative professionals. The goal of this card game is to design a main character, a sidekick and a game throughout three different phases while improving your game design skills.

Personally, I have found Game Seeds to be an excellent tool for workshops because it appeals to novice, intermediate and advanced game designers offering a unique way of developing group discussion and collaboration. On top of that I had the opportunity to invite Christophe Berg (the Game Seeds designer) to do a series of workshops and talks with me during a special event held a year ago, and I also helped the project with a Spanish translation and a character sheet.

How to Play Game Seeds

There are two ways of playing Game Seeds: Teamplay and the Two-Player Variant.

Teamplay is focused on playing the game between two teams, with each team having up to six players. The teams play while applying time constraints and the end result is a Hero, a Sidekick and a Game

The Two-Player Variant is focused on Character Design, and you may choose to not apply time constraints. The main goal of this variant is to have a quick game with no evaluation of its outcomes from fellow players - that means you will be your own judge.

Tip: Even though Game Seeds has two basic ways of being played, I've always encouraged people to come up with their own game modes

Anatomy of a Card

Before we get to play the game, let me explain the anatomy of a Game Seeds card.

Each card has elements that will define the character's specific aspects, attributes and a game mechanic. 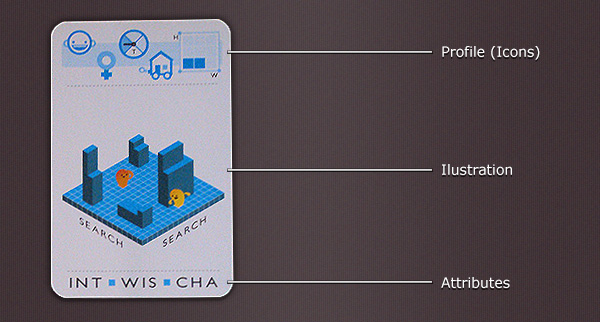 In the image above you can see the description of each of the profile icons that appear at the top of every Game Seeds card. This icons will help determine the different characteristics of the character and its location in time.

Once we get into the game you will understand how to interpret these icons according to the cards that your team has. 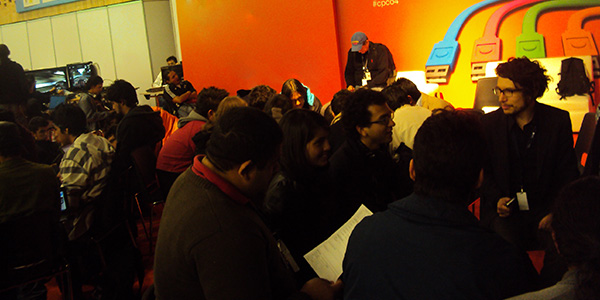 Now that you understand the different elements that compose a Game Seeds card I think it's time that we play the game! In this particular example I will explain you how to play the game in Teamplay mode.

We start by splitting the players into two groups (with a maximum of six players per group), and then we shuffle the deck of Game Seeds cards and give six cards to each team.

Step 1. Selection: Each group selects one of its given cards to keep.

Step 2. Swap: Each group then passes its remaining cards to the other group.

After this, teams repeat Steps 1 and 2 until there are no more cards to distribute.

Phase One: Design a Hero

Duration: 10 minutes
Outcome: Written short description of the main character. One person must get ready to pitch the Hero in a two minute speech.

The set of six cards per group will define the core attributes of the character.

Let's say that your team has the following six cards:

Initially we're going to direct our attention to the profile icons at the top of our cards and write down the most recurring values. (In the case of a draw, we pick the team's most wanted value.)

Detail of the Profile icons 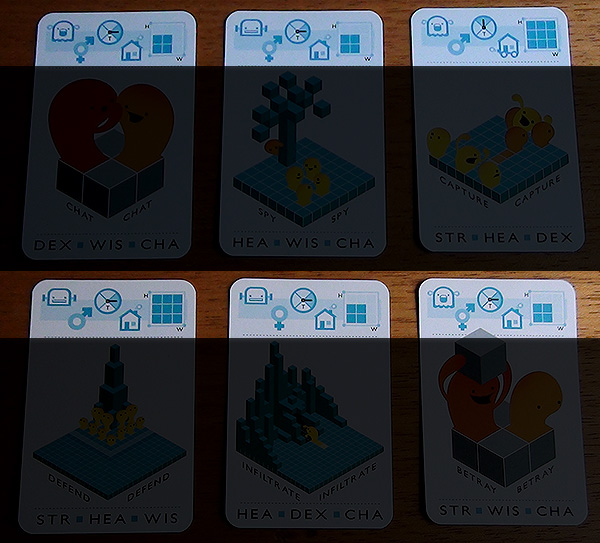 According to the profile icons in the cards our character will have these attributes:

Now, we interpret its main attributes by looking at the bottom of the cards and writing down the values:

So Wisdom, Charisma and Health are the main attributes of this character. However, it is brainless (zero intelligence) and has just normal strength.

Tip: Depending on the type of workshop, I sometimes ask the players to focus on the character's weaknesses instead of its strengths.

This is the step where you add a personal touch:

Be sure to define all elements that you will need to agree upon as a team and write it on your paper sheet (this will become the hero description sheet). Feel free to add any distinctive details that would contribute to give him a very unique personality.

One person on each team then has two minutes to present the created character.

I've found that people often underestimate the importance of this step because they want to get their hands on the game idea and the character design. Preparing a pitch, even if it's just a two minute one, is extremely important because as a game designer you need to understand the features that will make your game attractive to a possible publisher, sponsor, investor and (of course) player.

Team A gives their hero description sheet to Team B and vice versa.

This is the end of Phase One, which is team oriented. Now the game becomes individual.

Duration: Five minutes
Outcome: Written short description of the new character. You will have to be ready to pitch your character in a two minute speech.

This new character will be the hero's sidekick. Your goal now is to design the best matching character of the given hero. It's an individual game, even if you stay in your initial team. To design a consistent pairing character, it's important to listen to the opponent team's pitch and read their hero description sheet carefully.

You should produce a full character description sheet (profile, attributes and personality).

Each player presents the character he or she designed to the opponent team.

Team B judges the sidekick created by each players of the Team A for their hero and vice versa.

Then each team votes to elect the best sidekick character proposed by the players of the opponent team looking for the most consistent and best-pairing character for their initial hero.

One player per team will then be elected and become one of the two finalists.

Tip: Sometimes instead of creating the sidekick during this phase, I like to create the hero's adversary. 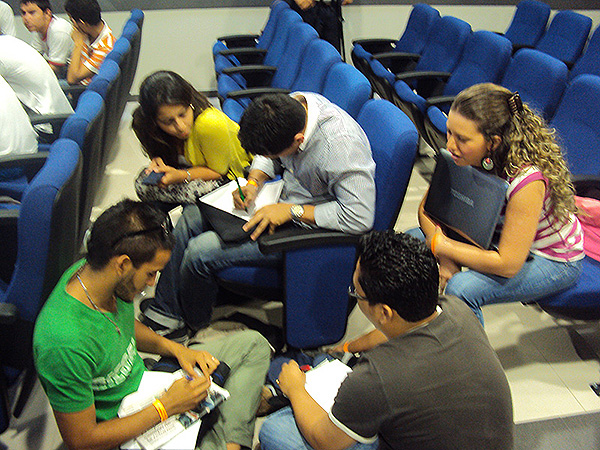 Duration: Five minutes
Outcome: A pitch of the game idea

Come Up With a Pitch

The finalists now have to design and propose a game idea. The other players endorse the roles of producers and members of the jury and will have to pick the most innovative game idea.

Tip: Include in the jury people from the audience, professors, co-workers, etc

Each finalist starts with his pair of characters. He chooses one Game Seeds card that summarize his concept (for example, DEFENSE as the main gameplay mechanic)

The pitch of the game should include:

Each finalist should write a summary that describes his game idea as it stands out, in a catchy and attractive way.

Each finalist takes five minutes to present his game and the role of the pair of characters in his game concept.

All the other players are now part of the jury and vote for the best idea.

One of the two finalists will then be elected and wins the overall challenge.

This is the outcome of playing Game Seeds in the Game Seeds sheet that I created: 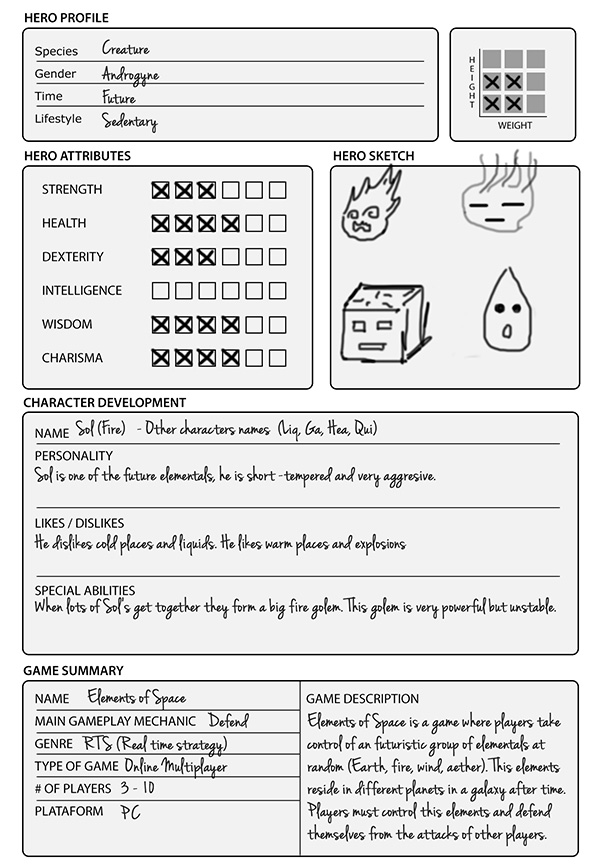 As you can see in this image, I have no talent as a concept artist.

To practice and quickly discover the game you can play the game with someone else. This variant of the game is focused on Character Design and the implementation of time constraints is optional.

Two-Player mode is played just as the Teamplay mode but in this case each player takes the role of one team and they will only design a hero and a sidekick.

Tip: Improving your skills in character design is all about practising. The more you play, the better you will eventually become. That's the main goal of this variant.

Now It's Time for You to Play!

I will pick six cards at random and you will have to figure out the main character profile and attributes as well as come up with a game idea based on a game mechanic from one of the cards. Make your pitch in the comments! 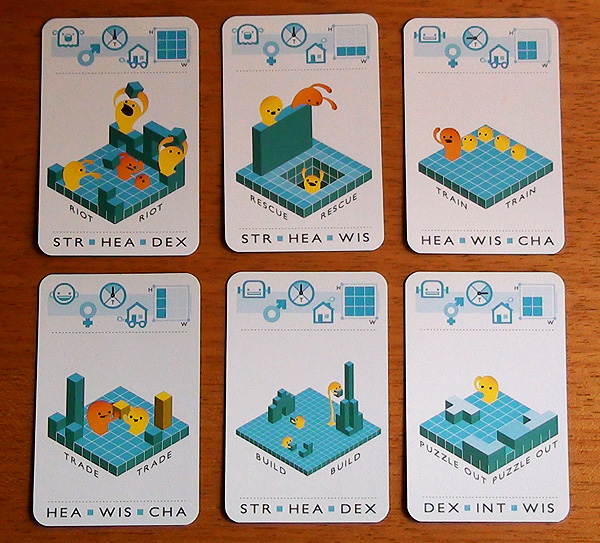 As you have seen by now, Game Seeds offers a fun and different way of approaching game and character design. The game has very defined rules to be understandable by anyone but also has the flexibility of allowing you to come up with your own rules and game modes.

If you enjoyed this, check out my article on using the Deck of Lenses cards to help you improve your game design skills!
Advertisement
Advertisement

David Arcila
Hi! My name is David Arcila and I’m an independent game developer, audiovisual producer and avid gamer. I’m also the co-founder of ProfusionGames.com a small dev team where we strive to make fun and engaging games. You can play my games and see more of my work at davidarcila.com
Weekly email summary