How Thomas Was Alone Uses Narration to Build Its Characters

Thomas Was Alone is a minimalist platformer, starring multiple characters... who are all simple rectangles. Despite this, the gamer grows attached and hopes to complete the game for them, instead of beating it for achievements, thanks to the way the characters' motives are built through narration.

If you haven't played Thomas Was Alone, take a look at the trailer introducing the narrator, Danny Wallace:

You could also watch some Let's Plays of the game, but I recommend you at least try the demo for yourself.

Thomas Was Alone bundles all of its mechanics and tacks them on to characters. Their personalities match that of their abilities, with the average Thomas being an optimistic Joe Brown, and the over-achieving John being quite prideful of his abilities. Because you initially start off with the character alone in their usual test environment, you can relate to how the AI feels after testing alone for so long.

Because the story is told through the eyes of the character, several things are quickly established:

Each one is essential to relating to the characters and hoping that they progress. Instead of becoming a simple platformer, the game transcends and uses the platformer as a medium for telling a story. 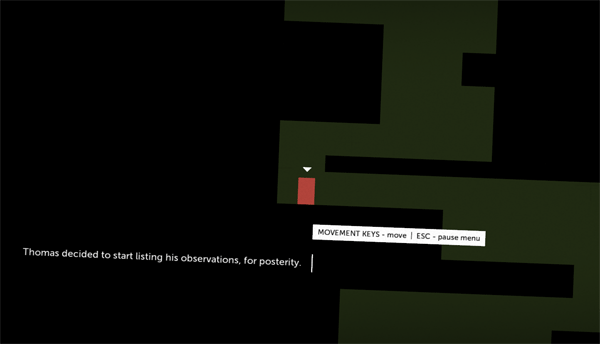 It’s a simple story, but because we feel the motives of each and every character, we want to complete it for their sake. The plot and personality that a character moves with is important — but I am going to emphasize the latter two points.

Including the motive of characters and letting the gamer understand that motive is the one move that bumps a game’s plot up from ‘good’ to ‘exceptional.’ Knowing what your characters are going to do is only half of the story; why they do it is what makes gamers sympathize with (or hate) your characters.

On the other hand, using the character as a way to explain the environment is an easy way to avoid Exposition Fairy Syndrome. It sets up the world naturally, without shoving a bunch of backstory down the throats of the gamers.

There are several ways of determining a character’s motive, and the best is to let them monologue their environment, just as the narrator does for the characters in Thomas Was Alone.

We understand early on that the average Thomas is optimistic, aware of the trials ahead of him, but also hopeful as he moves up and to the right. On the other hand, the pessimistic Chris has lived his whole life doing mediocre leaps and after watching Thomas jump circles around him (sometimes literally), his motive is simply to be alone.

Although Thomas does not change throughout the game, Chris slowly begins to open up as he falls in love with Laura, and his motive begins to change. The gamer, seeing this motive change, will instantly want to continue the plot, hoping that they can give the pessimistic Chris some hope and a good ending. We want Laura to finally find someone who won’t disappear, and we want Claire to finally fulfill her dream of becoming a super hero. 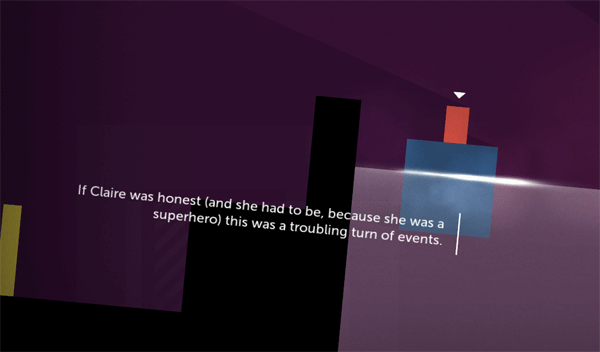 Establishing a character’s motive is the same as establishing what they want, and it’s essential to making the player care about the characters they’re using.

Establishing the setting is also a tricky matter, but using examples from Thomas Was Alone, we can start to pinpoint some methods. There are three different ways that the characters and narrator reveal the scenery:

The first emphasizes that you don’t always have to show to tell. An off-hand remark about how lonely Thomas had been and how he has started to narrate his own actions tells the gamer that he has been testing for a long time and has probably started to go off the deep end (even if he did so in an optimistic way). This makes the gamer sympathize with AIs right from the start — something necessary, since the game is about AIs becoming self-aware. 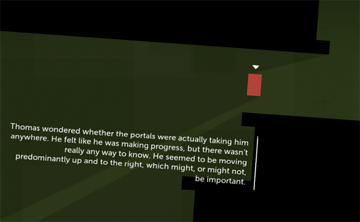 "Up and to the right" initially appears to be a tongue-in-cheek reference to the level layouts.

When Thomas discovers the key to the next world, the phrase ‘up and to the right’ changes entirely, becoming a kind of religious pursuit instead of a test goal. Thomas is aware that there is something to the up and to the right, tells all the other characters, and pursues it in the hope of entering a new world. Up and to the right was constantly repeated through the game by both the characters and the narrator, so this new significance is accepted by the gamer and re-inspires them to complete the game.

Why exactly do we need to give the characters motive and backstory? Making them believable and real is a major part of making a game a memorable experience. Thomas Was Alone could have performed just as well with no dialogues or characters at all—just simple rectangles with their own mechanics built in. However, giving these characters experiences and motives makes them pop out of that rectangle-shaped mold and become something that the gamer cares about and remembers long after playing.