Holiday music is already filling the malls, people are scrambling to buy gifts, and snow has already begun to fall in parts of the world, signalling the holidays are here. Some love it, some hate it, but everyone gets stressed at one point or another during this time of year. Let's see whether Effing Games's new release, Effing Worms - Xmas, can relieve some of that stress. 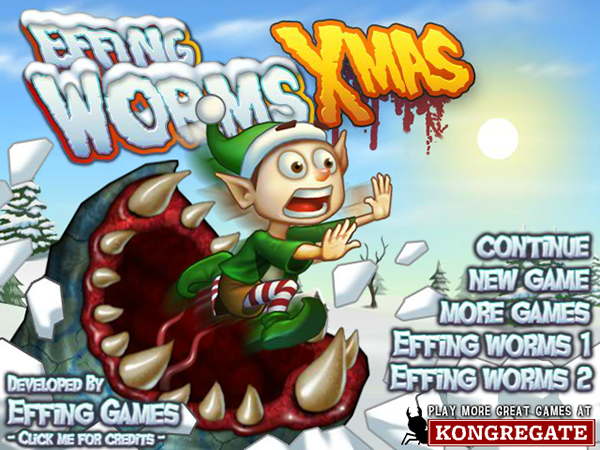 Effing Worms - Xmas puts you in control of a tiny worm that's built and ready to ruin Xmas. In this context, Xmas may be Christmas in an alternate dimension, or a new holiday altogether - whatever it is, get ready to wreck it.

The goal is simple: using WASD or the arrow keys, you must navigate your worm to its unaware victims, and destroy them in any way possible. At first this consists of simply eating them, by running into them head on, but eventually you'll have a full arsenal of ways to destroy, if that's the path you choose.

My one complaint about the controls is the lack of mouse support. The game's controls are very simple, and would be compatible with the mouse, so it's a shame it wasn't implemented as an optional control scheme. Simple movements of the mouse could define where your worm goes, and the optional spike shooting could be activated with left click. While it's not a major issue that the control scheme doesn't exist, it does potentially alienate some more casual gamers, and prevents the game from being a (more sponsor-friendly) mouse-based game. 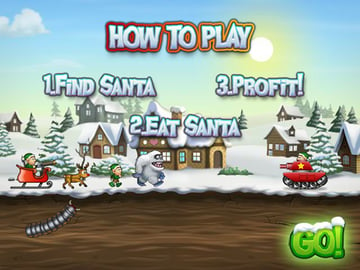 At its core, the game is fast-paced, simple, and enjoyable - and these are its greatest strengths. Due to the simple controls and lack of a tutorial (the quick on-screen instructions don't take up your time; they're simply there for you to read if needed), the game is quick and easy to jump into. Within seconds you can be eating elves and yetis, and wrecking up a winter wonderland. The action doesn't change too much throughout the game, but it's short enough that this doesn't really matter.

Even Simple Games Need Some Direction

The biggest fault with the simplicity of the game is the lack of direction on how to actually complete a level. The game uses a mission system, where you're given a goal like "eat X enemies from behind", but does very little to relate this goal to the player. 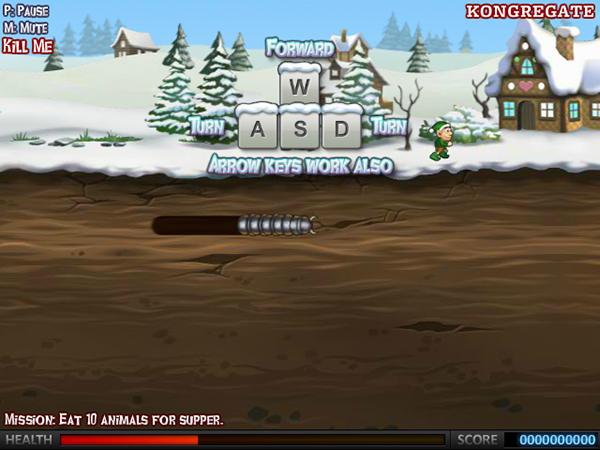 It's long been known to game developers that text in a game doesn't get read by many players, so it's kind of silly that the core goal is presented in text (and tiny text at the bottom of the screen, to boot). A more elegant solution to portraying this information would have been to highlight the mission section in the first mission, and put a marker over the enemies that actually contribute to the goal. This would have ensured that players knew there was a mission goal in order to complete a level. That being said, simply going crazy and killing things almost always accomplishes the mission goal, so it's not a big deal.

While the game is fun, its core mechanics can't take all of the credit. Much like how a glass of eggnog is enhanced with some nutmeg, Effing Worms - Xmas is enhanced with the spice of an upgrade system. 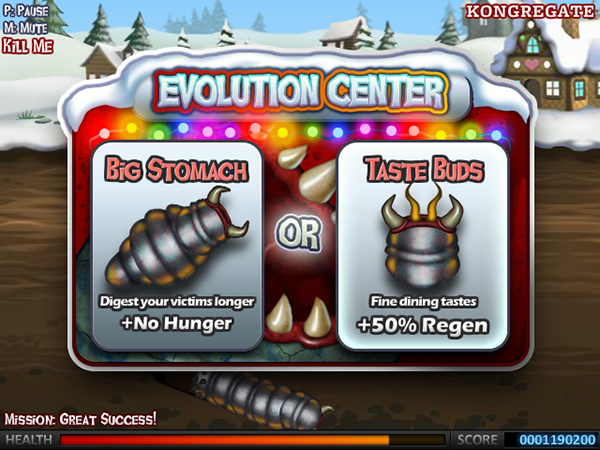 After each mission, the player is presented with two possible upgrades. You can only ever choose one, so you must pick carefully, as your decision will affect how you play the rest of the game. Some upgrades will grant the worm more health, while others will give it a spiky tail that destroys enemies as it comes into contact with them. Upgrades are somewhat diverse, so you are usually left wondering what the game would be like had you picked the other option.

My one complaint about the upgrade system is that it's a tad simple for my taste. With such a basic core mechanic (pure destruction as an enormous worm), it's easy to come up with insanely awesome ideas on how to evolve this creature. The game doesn't get too crazy, and too many of the upgrades pertain to the core stats, such as health or speed. While a few upgrades touch on being wonderfully abnormal - such as becoming a land shark (spikes above you harm enemies, even when underground) and spitting out harmful blood with a roar - there's still plenty of room for creativity.

Each game only lasts a short while, but variations in the aforementioned upgrades allow for some somewhat unique playing experiences, and will keep you entertained for at least a second playthrough. There's also a sandbox mode on offer, and judging by the comments on various portals, and insanely high scores (beyond a few places that would fall victim to hacking), it's evident that people have enjoyed this addition.

One other positive addition that I'll mention, related to score, is the massively large score counter; argue against it all you want, but there's definitely something more rewarding about a 20 digit score than a 4 digit score, and Effing Worms takes advantage of that for sure. The sandbox mode does meet a "kill screen" of sorts however, due to the player forever increasing in size and speed, with no limitations. This eventually causes the screen to be entirely blocked by a single segment of your worm, and essentially kills any rational remaining fun of the game (though you can still blindly kill enemies and run up your combo, which is oddly addicting). 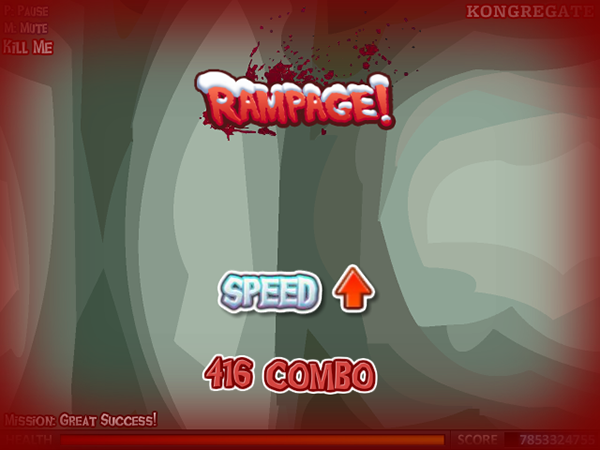 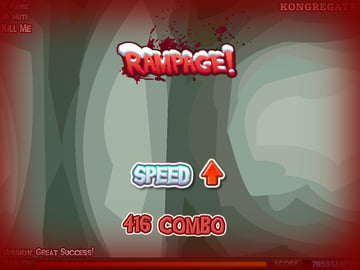 It would have been great to have the camera zoom out to allow for more strategic and visually acceptable play, but sandbox mode in general is a gift of an extra addition, so I shouldn't nit-pick it too much.

Effing Worms -- Xmas has fantastic artwork, with little room for improvement from my perspective. The graphics are polished throughout the entire game. Animations are incredibly smooth, each asset is crafted uniquely (no palette swaps or other cheap tricks), and the attention to detail is very high.

Many games suffer a bland main menu, but right from the start, the main menu is animated and full of action. This is important, as the first impression of a game sets both expectations and a mood. If a player feels the menu is of low quality, they're far more likely to suspect this of the game; if they suspect this of the game, it's somewhat of a self-fulfilling prophecy, as they'll have a more negative outlook on everything as they approach it. 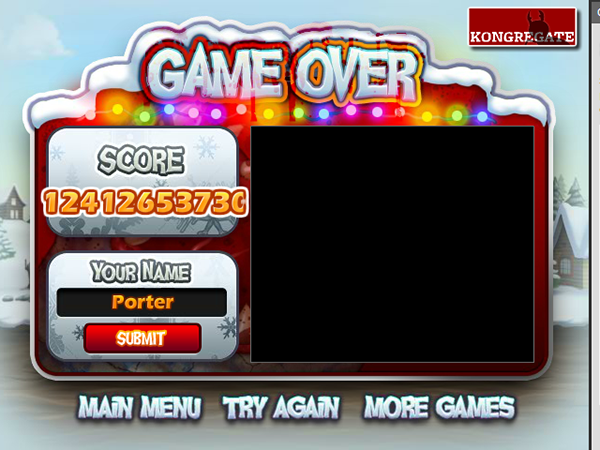 The polish doesn't stop on the main menu, and shines especially bright during gameplay. The background has multiple layers of parallax, adding great depth, and a charming visual world, all the more suited for destruction. Even upon getting Game Over, it's clear that each menu was carefully crafted and given as much attention as the last.

The audio is also exceptional. I don't personally listen to too much heavy metal, but if there's one time when I'd prefer to, it's while raising havoc among Santa's elves.

The game begins with a soft, cheerful holiday tune, but quickly changes to raging heavy metal as destruction ensues. If you dive back underground, and remain peaceful for a moment, the music will quickly change back to its calm, peaceful self. This small touch of audio polish goes a long way, and definitely brought a smile to my face. The heavy metal itself makes for a very fitting and atmospheric piece, and I don't think any other genre would due the trick better.

Again, there's a great level of polish to the audio, such as the jingle bell sound when hovering over a menu option and the roaring sounds on the main menu. The sound effects throughout the game are very well done, and are found everywhere you'd expect them to be. Everything fits the action perfectly, and drives the upbeat nature of the game home.

Effing Worms - Xmas may have a few minor faults, but for what it is (a quick holiday-skinned spin-off of a popular franchise), it's done excellently. 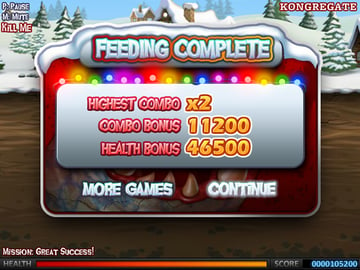 It's clear to me as both a developer and player that the amount of effort that went into this game was significant, and was far more than just enough to scrape by and get a game out for the holidays. There's extreme polish in every aspect of the game, and aside from the few faults I mentioned, the entire game shines as a very high quality, complete package.

As a game developer, I often think of combining completely random games to create something similar, but unique. How would you like to see something that combines the similar hit Sydney Shark, with Effing Worms?

Porter
I'm a game developer, professional game consultant, and avid gamer. I've been playing games since the age of three, and have loved everything about them since before I can remember. To keep up on my current projects, and overall view of the game industry, check out my developer blog, and follow me at @Gemfruit.
Weekly email summary