Easy Mode: When Easy is Okay

Every gamer and games journalist will invariably end up talking about difficulty when discussing a video game. This often takes the form of a comment saying it's "too easy" or "too hard", but it's a topic that deserves to be looked at in much more depth, as the way it is handled can completely reshape a player's experience with a game. In this article, I'll look at the many ways low difficulty can affect a game experience.

Definition of Difficulty: The amount of player skill required to progress through a game experience. (From my previous article.)

As I stated in the previous article of this series, difficulty is (or at least should be) baked into the very core of any video game's design. More specifically, we talked about high levels of difficulty, and the benefits great challenge can bring to an experience.

However, this doesn't mean all games need to be difficult. In fact, there has been a growing trend in game design over the last few years for easier and easier video games, mostly in order to appeal to a more casual audience who developers seem to think aren't capable of enjoying more difficult games.

I don't know about you, but this is how I game.

This situation has brought up an interesting debate: is an easier, more accessible game capable of reaching a wide audience of players better than a more complex, difficult and nuanced game that fewer will be able to understand and appreciate? I personally believe that both types of experiences have their place in the gaming landscape. Problems arise, however, when developers try to make their game into something it isn't, trying to increase its accessibility when that is not appropriate in the context of the game's design.

Perhaps no modern game series is more guilty of this sin than the Assassin's Creed franchise. These are very complex games, with rich worlds to explore, nuanced storylines spanning multiple instalments and a plethora of different game mechanics to grasp and understand. These are the types of games casual players don't play; these games are designed for the hardcore.

Unfortunately, every single Assassin's Creed game suffers from the same fatal flaw which threatens to break the very core of its functioning: the games are just too easy.

The Assassin's Creed games hinge on three basic gameplay pillars: combat, free running and stealth (although the latter has taken more and more of a back seat to the others as the series has progressed). Other than a few key distractions present in the more recent games, such as naval combat or tower defence, everything you do in Assassin's Creed can be boiled down to one of these three pillars, or a combination thereof, though there is a noticeable emphasis on combat.

There have been many criticisms thrown at these pillars of the franchise over the years, with the stealth often being called frustrating and the free running cited as being overly automated. However, for the sake of this article we will look at the most prominent of the three: combat.

Combat in Assassin's Creed is an exhilarating affair, filled with brutal executions and flashy combos, but it's entirely too easy. It's almost impossible to fail during a combat encounter in any Assassin's Creed game, no matter how many enemies you are fighting.

There are a multitude of reasons for this, but it mostly comes down to the fact that you are simply overpowered, sporting the ability to instantly kill most enemies and take a ridiculous amount of hits before you are downed. Since the vast majority of stealth and free running sections can be completely avoided by turning around and fighting your pursuers, the ease of combat often serves to trivialize the experience. 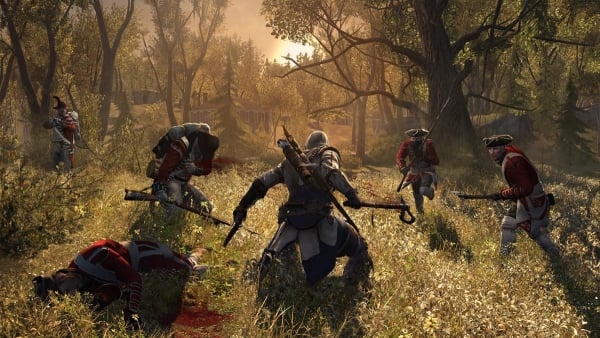 Five versus one? Come at me.

In Assassin's Creed 3, for example, it's difficult for the player to feel like they are training to become a master assassin when their character has proven capable of winning fist fights against bears as a teenager. Other scenarios simply feel like a waste of time, such as waiting for a snowstorm to use as cover to infiltrate a British outpost when your character can easily defeat the entirety of the red coat forces armed with nothing but a rabbit snare.

Another great example of a game getting caught in the accessibility trap is the newest Legend of Zelda game, Skyward Sword. The game is filled with many devilish puzzles that would be tons of fun to solve - if only you were given the chance to.

Unfortunately, you are burdened with an overly helpful companion who feels the need to give you the solution to puzzles proactively, often telling you how to unlock that pesky door at the end of the room before you even had the time to notice it was locked. You do not need to listen to her advice, but she will keep reminding you that she has something to say until you do.

This type of helpful partner has been a staple of the Zelda series since its 3D début, but never have the companions been as overbearing as the one in Skyward Sword.

Now before anybody runs around calling me names because I'm ragging on some very well received games, let me say that Skyward Sword and the Assassin's Creed games are all quality products. All I'm saying is that their level of difficulty, or lack thereof, is not appropriate in the context of the mechanics or the mythos, and the experience is definitely hurt because of it.

Being a badass assassin is still empowering, and Skyward Sword's dungeons are still as elegantly crafted as one would expect given the series' history, but they aren't without flaw, and difficulty is one of them.

So Easy Games Are Bad?

What we've just looked at are games that are too easy, or rather games who were hurt by their overall lack of difficulty. This however does not mean that there is no place for less challenging games, and it also doesn't mean that any serious "hardcore" game experience needs to be difficult. What it all boils down to is something that risks becoming a theme in this series: keep difficulty in mind when designing the core systems behind your game.

Essentially I'm saying to not make hard games easy or easy games hard. The games we looked at stumbled because their mechanics and themes did not mesh well with their lack of difficulty. They were simplifying the "play" part of gameplay, diluting the interactive element to the point where the rest of the experience no longer fit.

Who Does It Right?

Let's now look at a game that takes advantage of all the benefits of being easy, namely providing an experience without frustration, without interruption of narrative or thematic flow because of difficult sections and with extreme accessibility to a less skilled or determined audience. This game is thatgamecompany's Journey.

Journey, for those of you who don't know, is a about beauty and personal interaction between two strangers. The game is short, lasting only a couple of hours, and basically consists of walking towards and then scaling a mountain. You can fly a little bit depending on how many collectibles you find along the way, but these are entirely optional.

There are also no time limits, it's impossible to die and there is only one instance where it's possible to harm yourself in any way, though the repercussions can only really be considered sentimental as they have no impact whatsoever on progress. The game goes beyond even being easy: it practically plays itself.


LamouraGames' video walkthrough of Journey. Contains spoilers (as far as such a game can have spoilers).
While I don't think the aspect of human interaction and difficulty can't really be properly delivered through watching somebody else play the game, I do think videos express very well the beauty and serenity on display here.

Unlike what you would expect, though, it's not boring at all, because everything in the game is so breathtaking. The graphics are unbelievably beautiful (just look at the screenshot below) and the musical score will sweep you away into another world. But none of this is really the point of the game; what really hooks you is the other players.

As you traverse the world you will encounter other players, you will not know their online IDs, and you will have no means of communicating with them other than a few small chirps your character can make. Yet somehow, because of the way everything in the game is designed to support cooperation, you will travel together and you will become attached to this person you know absolutely nothing about, and it's beautiful.

This. This is beautiful.

But I'm not here to review Journey and all of this does have a direct link to difficulty. Basically, Journey wouldn't work if it wasn't stupidly easy. The game focuses on human interaction and on taking in beautiful vistas and sounds, and none of these things would be improved by a more difficult gameplay experience.

In fact, if the game were more challenging, players wouldn't necessarily be interacting with each other on the basis of what they wanted to do, but rather on the basis of what they were capable of doing as gamers. If Journey was filled with complicated puzzles, someone who might want to help their partner come up with a solution might not be able to and the interaction between the players would then be governed mostly by the game's systems rather than by the players themselves. By keeping things simple, Journey manages to avoid this pitfall, letting players interact with each other on their own terms. The difficulty in Journey is trivial, but it only exists in service of the core design tenants behind the game.

The lesson here is exactly the same as it was in the last article: keep difficulty in mind when designing the core systems behind your game. Do not wonder if your game is too difficult to be accessible. If you want a game that anybody can play, regardless of video game experience, then design an experience that suits that goal; do not try and shoehorn in accessibility when it doesn't fit with the core design of your title.

However, do not think that difficulty and accessibility are one side of the same coin, though they do often intersect. Remember, even the most complex and engrossing games can be very easy and the most simple of games can be incredibly challenging. What's important is that your game's difficulty level makes sense within the context of the overall experience.